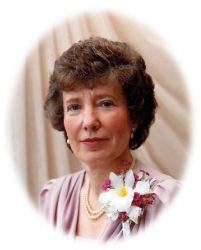 Morden: Susan Lee, beloved mother of children John, Tim and Karen, passed away quickly on Friday, December 16, 2016 in her suite at Victoria Landing, Brandon, where she had resided since 2008.

Born September 14, 1930 to Franz and Justina Goertzen of Rosengart, Manitoba, Susan was the twelfth child in a family of seventeen children. As a young woman, she trained in the field of healthcare and was working as a dietary aid at the Princess Elizabeth Hospital in Winnipeg when she met and fell in love with Alex Morden.   They were married in July of 1953 and took over the operation of the Morden family farm near Hartney, in the Menteith District, in 1954.

As a loving partner to Alex, Susan was never far from his side, taking part in all aspects of the farm’s operation.  Whether it was driving trucks or combines, tending a large garden, preserving fruits and vegetables for the winter months or taking hot meals to the field, Susan demonstrated her understanding of farming’s importance and her husband’s love of the land by being a willing and dedicated participant.

Susan also engaged enthusiastically with her community. She was a member of Eastern Star, the Hartney UCW, 4-H, and was a devoted square dancer with partner Alex for many years. Susan was known and liked by many in the community and could always be counted on to supply help or dainties for local functions.

Susan moved with Alex to Hartney in 1980.  She was a friend to many lonely seniors in town and volunteered to be contact for several lifelines. As a retiree, she saw the value in keeping active, walking the bypass for years and learning to swim shortly before she turned sixty. Susan was known for being diligent about healthy exercise, swimming in the Hartney Pool throughout the summer and travelling to Brandon with Joyce King to swim in the winter.

Susan supported and cared for husband Alex as he suffered from post-Polio syndrome and parkinson’s until he required personal care.  Even then, she visited him daily at Hartney Health Centre and saw to his needs until he died in 2002.

Susan moved to the Victoria Landing Retirement Residence in 2008. Her enthusiasm for engagement and activity did not wane, as she participated in a host of resident activities and, much to her children’s surprise, became quite competitive. She became the resident Wii expert, knowledgeable in how to operate the equipment and win at the games. In short, she adjusted to life at Victoria Landing well, always dressing for dinner and enjoying daily table conversations with her dining companions.

Susan will be deeply missed by her children, John (Sonja), Tim and Karen (Warren); her six grandchildren: Joshua, Alana, Andrew, Simon (Amanda), Andrea (Axel) and Megan (Chris); great grandchild Lincoln and Mary, mother of Alana and Andrew.  All of Susan’s siblings predeceased her except her sister Annette (George).  Susan was predeceased by husband Alex and infant son Andrew Garry Morden.

Susan’s family would like to thank the wonderful and tireless staff at Victoria Landing in Brandon.  Susan felt well cared for and her family consistently felt the staff worked to a high standard.

The ceremony to Celebrate Susan’s Life was held at St Paul’s United Church, Souris, Manitoba on Wednesday, December 21, 2016 with Reverend Douglas Craig presided.  Susan was laid to rest in a private graveside ceremony in the Riverside Cemetery at Hartney, Manitoba.

Donations in Susan’s memory may be made to the Hartney Community Swimming Pool c/o Municipality of Grassland, Box 399 Hartney, Manitoba, R0M 0X0.