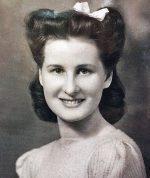 Ivy Edith Watkin – Born July 7,1921 in a sleepy little town of Seabright, Nova Scotia to Barrington and Elizabeth (Boutilier) Sparrow. Moved to Brandon, Manitoba wher she lived and prospered with her family and her 5 siblings, Olive, Hazelet, Doug, Laura and Eric (who is the only living Sparrow to date and who currentley resides in Camrose, Alberta). On July 1, 1942, she married a longtime friend John Watkin, who had just enlisted in the RCAF and was posted to Fort MacLeod. She probably didn’t relize what being married to a military man meant as the succeeding years progressed, she would be on the move to a new posting every three to four years. In the next three years, she would give birth to two children, Barry (February 1944, Fort MacLeod) and Cheryl (October 1945, Calgary, Alberta), and lastly, she gave birth to a third child Janet (1963 Goose Bay, Labrador) during our last tour there. Her legacy today includes 5 grandchildren and 9 great grandchildren. As a testament to her strength, she took everything in stride and often had to organize and direct the movement of the family and effects alone. I remember specifically, during our move from Calgary to Goose Bay, around 1956, we took the train to Montreal. From there we were to board an aircraft to Goose Bay, Labrador. As we progressed from our hotel room in Montreal to the airport, we went by cab. On the way, the cabbie stopped for some reason to buy something, a pack of cigarettes perhaps, and was gone for several minutes as the cab meter continued to count up the minutes. Upon the cabbies return, mom sternly advised the cabbie that she was not going to pay for the time he was absent, and she didn’t. I guess the cabbie didn’t expect such a strong admonition. Having gone through the complete move of house and home, she was in no mood to accept any guff from anyone. She had an inner strength which she demonstrated when needed. She was also quite a cook. So many memories are invoked through our other senses, especially smell. Some of the many remembrances were of the sweet smell of bread filling the house. Others were the pungent smell of freshly waxed floors as she was fastidious about cleanliness and order. She also had a wonderful sense of humour. I still can hear her throaty laugh, whenever she was with friends or even during intimate moments with us. That laugh remained with her until the end. We were so lucky to have been part of her life, to have experienced her love, sense of humor, her generosity and selflessness and her complete devotion to her family. God bless you Mom, we know you are in a better place. You are safe now. We miss you so much. Rest in Peace.  Funeral service was held at St. Luke’s Anglican Church with Interment in the Souris – Glenwood Cemetery. In memory of Ivy, donations may be made to a charity of your choice.