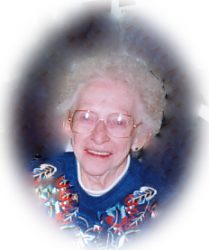 Morris — Our mom, grandma and great grandma, Ivy Lillian (Duncan) Morris passed away at the Souris Personal Care Home on April 18, 2015 in her 91st year. She was predeceased by her husband Don (2004), their son Larry (2011); her parents Andy and Lillian Duncan, brothers Mel, Cecil, Allan and Norris and sisters Winnie MacDonald, Ruby Doyle and Alma McCarvill. Ivy is survived by daughter Lynne (Butch) Locke and granddaughters Diana Cameron, children Abigail and Gage; Sandy (Shawn) Hulm, children Jace and Briggs; Christa (Ryan) Veitch, children Layton and Jordyn; sisters Bertha Denbow and Joan Phillips as well as many nieces and nephews and their families.

Ivy was born on April 12, 1925 on their family farm by Deleau, MB. Her dad left with the horse and buggy to fetch the midwife when her mother went into labour but things progressed quicker than anticipated, so the eldest sister, Winnie helped deliver Ivy and fortunately all went well. Ivy grew up attending Deleau School. After finishing school, she started working at the old Souris Hospital in the laundry department. The love of her life, Don Morris was working on the Doyle farm as a hired hand for Norman and Ruby. Don and Ivy were married December 17, 1947 and later moved to the Morris family farm near Menteith and that was home for many years to follow. They began their family there. They had a son Larry and a daughter Lynne. Ivy enjoyed her garden, knitting, sewing and baking. She was a 4-H leader for many years. Ivy loved spending time with her 3 only granddaughters and they have many great memories with Grandma. The whole family attended many “Family Night” dances in Souris. Mom would dance, Dad would visit! She was a member of the districts’ Botony Friendship Club for very many years. Ivy was very proud to become a “life member” of the Souris Legion Ladies Auxiliary and remained actively involved until her failing health in later years. Ivy was a wonderful person who was loved by many and will be greatly missed.