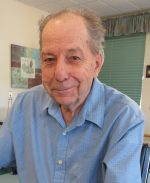 He is survived by Sister-in-law Marion (Ray), and numerous nieces and nephews

Raised on the farm and working for neighboring farmers until his career with CP Rail started in 1954, retiring in 1994.  40 yrs of railway work doing what he loved.  Lots of hours visiting with Les were involved with discussing railroad tracking, engines, speed limits, signalling.  Anything involving the railroad.  He spent the majority of his career in Thunder Bay but also worked in Alberta and finished his railroad profession in Manitoba working the yard in Portage and then Brandon.

Les retired to Souris and enjoyed time with everyone, either the pool room, the railway simulator with Ferg Devins  or playing cards at the legion.  He spent countless hours at Rays farm cutting up deadfall and organizing the shop, helping brother Jack at harvest time and any other job he could for whatever brother was in need.  Never any spare time for a retired handyman.

He loved baseball and claimed the Morris brothers were the heart of the Souris Cardinals, under Frank Mote, in the field on Jacks farm.  He was pretty young at the time but they needed one more so he made the team.

He was never married but had a large family with his brothers and their children and followed them without them even being aware.  He loved visiting, enjoyed a quick wit and dry sense of humor.  He was always eager to help where he was needed.

Les was an enthusiastic walker and could be seen in any part of town, he often included a stop at his restaurant of choice for an evening meal and visit with friends.

Several years ago Les was diagnosed with dementia and entered the Souris PCH where he was afforded 24 hour care.  It was commented on by the staff how much fun he was with his sense of humor and often enjoyed a sly grin after one of his jokes just to see the care givers smile.

REST IN PEACE YOU KIND AND GENTLE SOUL