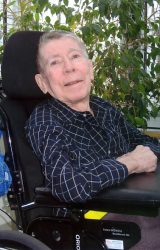 Phillips: It is with saddened hearts that we announce the passing of John Thomas Phillips know to many as “Jack”.

John was born September 5, 1934 at the family farm in the R.M. of Cameron, Manitoba and he was the youngest of seven children born to George Trineer and Lela Maude (Graham) Phillips. John passed away on March 9, 2015 at the Hartney Community Health Centre Hartney, Manitoba at the age of 80 years.

John lived life to the fullest. He was a loyal and committed person in everything he did. He spent all of his professional life working for Manitoba Telephone Systems which took him to many places around Manitoba including The Pas where he would meet his wife (and her 5 children) and then off to Thompson where he would end his career.

Upon retiring in 1989 he decided the call of the south was too strong and they moved “home” or as close to it as possible as he always called Lauder home. Pat continued to work and John enjoyed puttering around the yard at their first home in Hartney and of course at the “Lot” where eventually their trailer would be. He would spend many hours riding the lawn mower (even in the neighbour’s yard) and trimming trees (there definitely was a lot of those). John loved to tinker and work on projects and his vast collection of tools (sometimes 2 or 3 of the same kind) reflected this.

John enjoyed travelling with his wife Pat or Patty as he called her throughout the years. Even in his failing health he was still able to take a trip to Yellowknife in the summer of 2014 to see his second oldest granddaughter graduate from high school. He was so proud of all his children and grandchildren for all their accomplishments. Family was always very important to him.

In memory of John, donation may be made to the Hartney Community Health Centre, the Souris Health Centre c/o Prairie Mountain Health Box 10 Souris, Manitoba R0K 2C0 or to the