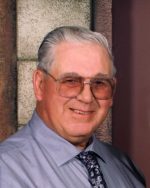 It is with profound sadness that we announce the passing of our Dad and Papa, Clifford Stewart Pomeroy on September 27th, 2017, at the Souris Hospital.

Cliff was born on April 20th, 1936 at Riverhurst, Saskatchewan.  In 1943, he moved to the South Beresford area with his parents Stewart and Muriel and his sister Betty.  Cliff married Florence Kunka (passed Dec. 2014) on June 17, 1961.  They had two sons Blaine and Gary. Souris was his family’s forever home.

Cliff had many, many jobs throughout his whole life.  He always said there were jobs he liked and some he didn’t like so much…but was always happy to have a job!  Many will remember him as their bus driver (20years), favorite welder, and the go to if there was anything to be fixed. (planes, trains & automobiles) Cliff retired from farming his own land in 1987, but continued his love of the land up to this past spring helping with seeding.

Cliff’s loves of his life were his family, farming and flying.  He took special joy in his two beloved grandchildren, Amber and Gavin, being their #1 Fan…from dance recitals to hockey rinks and everything in between Papa would be there.  Another hidden talent of Cliff’s was photography.  His camera was always at the ready to capture a memory, activity, or creation he had made.

Cliff was a very kind and gentle soul and would help anyone out if he could.  A great Dad, Papa, friend and co-worker, he will be missed by everyone who knew him.

Cliff is survived by his sons, Blaine and Gary (Allison), his grandchildren Amber and Gavin.  Also left to mourn Cliff is his sister Betty Clevett and her family, as well as the extended members of the Kunka Family.

A private interment took place at the Souris and Glenwood Cemetery followed by the funeral service at the St. Paul’s United Church on Monday Oct. 2nd, 2017.  The family would like to send heartfelt thanks to the Doctors and staff of the Souris Hospital for their excellent care of Dad during his time there.  Also to Dexter Kowalchuk and Kowalchuk’s Funeral Home for their professional services and to Wendy Rankin and St. Paul’s United Church, Souris, Manitoba  for the lovely service. Finally, special thanks to Walter Finlay for the most fitting Eulogy.

Donations in memory of Cliff may be made to the Souris Health District Foundation or a charity of choice.

“To most people the sky is the limit.  To those who love flying, the sky is home.”