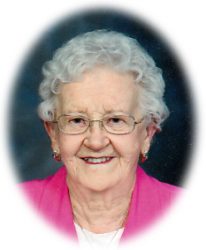 Norma Adine Reid – passed away peacefully on September 8, 2016, after a lengthy stay at the Souris Health Centre, at age ninety-two.

Norma was born October 2, 1923 to Charles and Minnie Adine Clark and grew up on a farm at Elm Creek, Manitoba. After completing normal school training in 1946, Norma taught Grades 1 and 2 in Elgin, Manitoba. In December 1948, she married Arthur Reid and together they farmed the Reid family homestead at 18-21-7 until selling the farm and retiring to Souris in 1987. Norma and Art travelled across Canada and the U.S. on several bus tours. They belonged to the Souris Golf Course and enjoyed playing golf with family and friends.

Always an avid gardener, Norma belonged to the Souris Horticultural Club for several years. She also enjoyed many years as a member of the Souris Art Club where she loved oil painting, and working with water colors and trying other media. For a time, she served as the treasurer for the condo board at Heritage Place where she resided independently until admittance to hospital.

Norma was predeceased by her husband of forty-nine years, Arthur Reid; by her parents Charles and Minnie Adine Clark, and by two brothers and sisters-in-law Max (Hettie) Clark, Lewis (Jean) Clark and brother-in-law Andy Lang.

The family would like to thank Dr. Ziada and all the wonderful staff at Souris Regional Hospital for their excellent care of Norma.  And a special thanks to Carolyne Cox for all of her tireless support and excellent assistance.

Funeral service was held at St. Paul’s United Church, Souris, Manitoba on Wednesday, September 14, 2016 with a private interment in the Souris & Glenwood Cemetery. Donation in memory of Norma may be made to a charity of your choice.