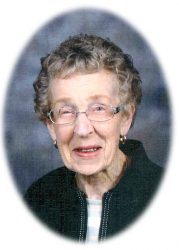 Sanderson – Audrey “Lorraine” passed away Saturday June 27, 2015 in the Souris Personal Care Home at the age of 96.

Lorraine was born in Carman, Manitoba on January 24, 1919 to Francis and Freda Butcher. She was one of 5 children, having 2 brothers and 2 sisters.

Lorraine married Reginald Sanderson in May 1937. Together they had 4 sons; Frank “Sandy”, Twins Robert and William, and Tim.

A private family interment will be held at the Souris & Glenwood Cemetery. In memory of Lorraine donations may be made to the Souris Personal Care Home Court Yard Fund c/o Prairie Mountain Health Box 10 Souris, Manitoba R0K 2C0.