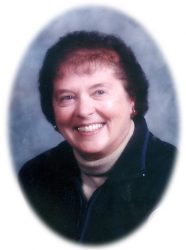 Mary Lou was born February 12, 1939 to Fred & Audrey Skrine.  She was the oldest of their three children and the only girl.  She grew up in the Whitefield district and took her schooling there until the school closed and she went to school in Deleau.  That was where she met her husband Alex Hardy.

Alex & Mary Lou were married May 4, 1957 and raised a family of four children.  Those years were spent helping on the farm, canning, baking and keeping house.  When the children were almost grown Mary Lou took a job at the daycare in Souris as the cook.  She enjoyed it there and decided to take night classes to earn her Early childhood Education certificates.  She was very proud of this accomplishment and continued to work at the daycare until 1992, even working as director there for a time.

Through the years music was always a part of Mary Lou’s life.  She had fond memories of performing at the Christmas concerts at Whitefield school .  She was an accomplished musician – she could play the accordion, the guitar, the piano, the organ, the keyboard and sing beautifully.  She mostly played by ear and once hearing something could usually play it.  She was the organist at the Grande Clairiere church. The choir was a special group of friends and she always talked about the fun they had at “practices”.      She also shared her talent by singing and playing at the personal care homes in the area.

Mary Lou liked to be busy.  Through the years she had many hobbies.  She always had some kind of craft on the go – she could sew and crochet and all her family have something that she made.  Mary Lou also curled, golfed and played cards – all with a very competitive nature- she loved to beat Dad at anything!!  They loved dancing together and began many lifelong friendships with the people they met at dancing.

The grandchildren were very special to Mary Lou and she always had time for them.  There were sleepovers, camping trips and Grandma attended as many of their activities as possible.  She was thrilled when the next generation of great-grandchildren started to arrive.

A private graveside service was held at the Souris cemetery July 4, 2015 with Father Philip Malayil officiating.  Members of the Grande Clairiere choir provided the music for the service.