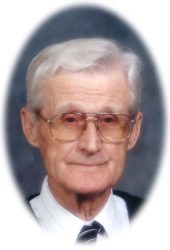 Dad moved many times in his early years living North of Souris, Carroll, Minto, Riverside and worked on two farms in the South Beresford District. He spent a short time working in British Columbia with his brother and his dad.

Mom and Dad spent their time farming in the Hayfield District and truly enjoyed the community rural life; the summer ball games, the winter tobogganing parties and the Friday Night Hebron Cars Evenings.

He would have been happy to stay in a 40 mile radius of home but travelled overseas to Scotland and England with his brother and later to London with his son to visit relatives and see the countryside. On one rare occasion they took a warm winter holiday to Hawaii. Dad travelled to Montreal and Toronto on a few occasions to buy livestock.

After he retired he continued to help out at the farm for many years. He enjoyed restoring old farm machinery and volunteered at the Museum and at the Church.

His pride and joy were his grandchildren. He spent countless hours attending all of their functions. He loved to be at the rink watching hockey and curling no matter who was playing. He had a life long love of horses and cattle. He learnt to drive a team when he was twelve and showed his registered Dairy Cattle in the sixties and seventies.

Mon and Dad rarely missed coffee time down town and were lucky to live in a close knit community with all their friends.

Special thanks to the Doctors and Staff at the Souris Personal Care Home.