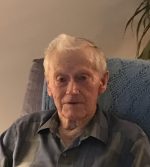 Unrau: John Unrau passed away peacefully on September 10, 2021 after a brief time in the Souris Hospital at the age of 97. John was a simple man. He valued his family, his friends and his community. John had an incredible will to live. He believed in hard work and conducted himself with honesty and integrity.

Predeceased by his wife Anne in 2009, he will be missed by his children Bob (Judy) and Joanne (Harold), his four grandchildren and two great grandchildren.