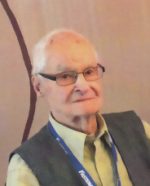 James Allan Polwarth ‘Al’ was born on a farm north of Melita (previously Broomhill) in June of 1927; the only child of Jim and Jean Polwarth.  Dad started school in Broomhill, although he admitted he was not a regular attendee and went as far as Grade 8.

Dad worked as a grain buyer for Ogilvie Elevators, later sold to Manitoba Pool Elevators, until he moved to Souris in November of 1949.  He applied to work as a trainman in Minnedosa, but was told there was more opportunity in Souris throughout the winter months.  It wasn’t steady work, so Al worked part-time driving and delivering coal for Buscarlet Transfer.  He met his future wife and best friend, Lauree Stonehouse, and built a new home in town in time for the wedding in June of 1955.

Between 1957 and 1959, diesel power came for the Canadian Pacific Railway, which lessened the number of jobs during this time.  Dad took employment with the Souris Creamery, delivered Bonnie Brae products, and worked carpentry with the late Harold Johnson Construction.  By this time, mom and dad had started a family: Ian was born in March of 1957, Colleen in January of 1959 and Vonna in July of 1960.  At this point, they realized that railroading was not going to be a steady income and in 1959, the family purchased a farm in the country, including a home in disrepair.  The snowstorm of 1959 was one of the worst winters in history and unfortunately, they had no fences or corrals raised, or any feed stored.  In the spring of 1960, Harold Johnson and Dad started renovating the old farmhouse – new shingles, replaced windows and doors, new siding and cupboards, and a water system.  The family moved to the farm that summer once the repairs were done.

In 1961, Dad also entered the trucking business by hauling cattle to Brandon and surrounding areas.  He quit the railroad in 1967 to focus on farming:  cattle, pigs, chickens, cows and continued hauling.  By the mid 1970s, the trucking business had become a full-time enterprise and Mom was not only a homemaker but bookkeeper for Polwarth Transport Ltd.  In 1981, they sold the farm but retained 33 acres, and subsequently build a new house and large shed.  Mom and Dad retired in 1996 and sold the family business.  You couldn’t go anywhere with Dad where he didn’t meet someone he knew from his truck driving days, as he was a regular at the Brandon Livestock Yard.  Mom and Dad both believed that to have locals patronize the business, you supported local.  Unfortunately, Mom was diagnosed with cancer in 1996 and Ian as well in 1998.  Ian passed away in 2001 at the age of 44 and Mom in 2002 at the age of 73.

Dad met Lillian Strain in 2006, and quickly became good friends and companions over the last 15 years.  Dad and Lil spent their time travelling; vacations in Victoria where they first met, a bus trip to Nashville and flew to Halifax where they joined an Atlantic bus trip.  They enjoyed driving to Brandon for supper and a movie, and frequented the Morden Corn and Apple Festival.  Dad would never turn down one of Lil’s home-cooked meals, and together they had the nightly ritual of Jeopardy.  Dad always wanted to return to his roots, so he and his daughters travelled to Scotland and Denmark and on another occasion joined Vonna and John to Las Vegas.  Over the years, Dad enjoyed his weekly golf games with his buddies, was a tireless Lions member and served two terms as a councilor for the Town of Souris.

Dad’s hearing in his later years wasn’t so good.  His father passed away at the age of 99 and suffered the same fate, refusing to wear hearing aids.  At that time, the technology for hearing assistance wasn’t as advanced, so Dad would roll up a piece of paper into a funnel and put it into grandpa’s ear to talk to him.  That gave his children ammunition to threaten Dad as he knew what they would do if he didn’t adapt to the changes needed as he aged.

In May of 2010, Dad purchased a house in the town of Souris and subsequently sold the farm in July of 2011.  He decided to sell that home in 2016 and moved into the Crescent Manor a couple of blocks away.  In early 2020, his health declined such that he was admitted to Souris Hospital until a room became available in the Minnedosa Personal Care Home, closer to his daughter Colleen.  In April of 2021, Al had a fall in hospital and although the surgery was a success, he never quite recovered.  His mantra was “I eat good, I sleep good, and I feel good… and I still have my memory”, which was so positive considering his dementia.  He may not have remembered what he ate for lunch, but he always knew his daughters, sons-in-law and their children, and continually asked about them by name.  He always voiced his belief that he had a good life and admitted to a few close calls over the years.  Dad adapted to all the changes in his life well; from improving technology, or farmhouse to a house in town, to apartment living, and finally the care home.

The family would like to thank those at Congregate Meals in Crescent Manor for the wonderful meals and for letting Dad finish the jello.  This service is so important to those who are not able to prepare a nourishing meal for themselves.  As well, a thank you to the staff at Souris Hospital, Minnedosa Hospital, Brandon Hospital Acute floor and Minnedosa Personal Care Home for their care and support.