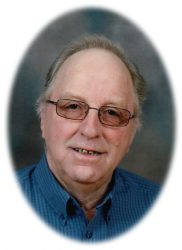 VINCK: Desire John (Des) Vinck died peacefully at Souris Hospital on June 1, 2016 at the age of 73, after a 1 1/2 year battle with multi system atrophy. He is survived by his wife Marie (Marcq), his daughter Michelle (Sydney, Whitney, Avery); his daughter Melanie (Maya, Saffia). He was predeceased by his parents John and Zelia and infant sister Alice. Des was born July 6, 1942, in Hartney. He enjoyed farming and took over the farm in the Grande Clairiere/Lauder  area after his marriage to Marie. He enjoyed all animals, playing pool, ball, curling, doing small crafts and helping with different events in both communities. He enjoyed his coffee outings after retirement but didn’t care for traveling too far – except after much persuasion – decided to go to France to visit cousins who had been here to visit with us. The most important part of his life were all his girls. He was so proud of them and always ready to help when needed. Funeral Mass was held June 6, 2016 at St. Jean’s Catholic Church in Grande Clairiere with Celebrants Father Eric Zadji and  Father Paul Bisson. Pallbearers: Harvey Mahy, Garry Jones, Terry Schuddemat, Adrian  Bertholet, Daryll Logeot, Maurice Dubreuil. Family tribute, Solange Rey; Liturgy, Marc Boulanger, Tim Murphy; Ushers Gaston Boulanger, Rollie Lobreau. Interment in Grande Clairiere Cemetery. In memory of Des, donations may be made to a charity of your choice.