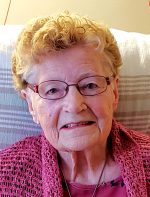 Wagner: Kay was born on Sept 15, 1925, to William George Akehurst & Eileen (nee Shilito) Akehurst, at Paygate Cottage, Ringmer, Sussex England.  In 1928 a brother, Arthur George joined the family. They were a happy family, until the anxiety of War came and much changed. Her Father (Grandad to us children) enlisted in the Army, and later, her brother (Uncle Arthur) enlisted in the Navy.  Kay at 14 yrs, trained as a Children’s Nurse, and cared for orphans and evacuated children for 2 years. At that time, she moved on, to serve in The National Fire Service, stationed near home, in Lewes Sussex England. During those years, she met her handsome soldier, and future husband, David Norman Wagner, 3RD CANADIAN DIVISION SIGNALS, from Minnedosa MB Canada.

On July 1st 1943, Dave & Kay were married in Ringmer Sussex. In 1944, 2 weeks after D Day, Dave with his Division was sent to France, and from there they moved up the coast to other locations.

On July 15 1944, daughter Shirley was born and Mum waited for almost a year for Dad to meet his daughter, which finally happened, in June 1945. After an all too short visit, Dad went back overseas, and very shortly after that, Peace was declared. Later in 1945, Dad visited his family in Ringmer, and then set sail for Canada.

In February 1946, Mum and Shirley sailed from Liverpool to Canada on the HMS SCYTHIA. About 2 days later, during a storm at sea, the ship broke down, and had to be towed back to Belfast Ireland, for repairs. The trip from there forward, was smooth, and 10 days from the original departure, they docked in Halifax Nova Scotia, at PIER 21.  In short order, they and many others, were on the train, and headed west, making many stops along the way, where Mothers and children, got off to face their unknown future!

Mum and Shirley were met in Winnipeg by Dad and after a few days, made their way to Minnedosa, where they were met by several of Dad’s family, and subsequently, many others from firstly, the Willow Grove community.

Over the years, Dad and Mum’s family grew to include, Christine Ann, Garry Stephen, Donna Lyn, Beverly Jean, Terrygail, and, lastly, wee Timothy David, who arrived and stayed with us for only a few short hours, but left his touch on the hearts of all of us. We all have rich memories of Dad and Mum’s love and care, for each of us over many years!

It was Mum’s delight to keep in touch with other warbrides and to meet many more over the years, with whom she had so much in common. Mum became a member of the SK & later on, the Manitoba Warbrides Associations and a highlight for her was their annual gathering each year.

Life began on The Farm!  SO Much was new & different, and even frightening at times.  Family & good neighbors did much to help with this new lifestyle, and that was remembered by Mum for all the years since.  Mum loved to tell her story, and gave much credit to her in-laws and neighbors, for good natured help in her new life as a farmer’s wife.

Mum kept her ties with her homeland very much “alive,” and over the years made several trips back to England, one of the most memorable being in 1980, when she could show Shirley all the things, places, and many of the people that Shirley had no memory of, but had heard about all her life. It was Mum’s delight, that some of her grandchildren also visited her homeland, over the years.

It was also a Joy, to Mum to have  firstly, her mother visit Canada in 1957, her brother Arthur,  a couple of years later, and over the years, her three Aunties, Sister in Law Judy,  as well as nieces, Sally and Nicola. Several cousins also came to Canada. John and Jean Akehurst, Karen Akehurst and Di and Mel Watts. One sure way to get Mum’s attention was to have an English accent or for her  to find out that one had English history, or had visited there!!

Dad and Mum enjoyed the friends they made in every location in which they lived. We children soon learned, that “home” was where Dad & Mum were living, and we too, enjoyed their friends over the years!

Dad and Mum instilled in all of us, a Love and Respect for God,. They were very active in their church, wherever they were living, participating in church activities and making many and enduring, friends!

Mum missed Dad Very much, but she involved herself with people, & kept busy. Her move to The Souris Personal Care Home, was the hardest move she made, but when all the facts were in front of her, she made the choice herself. As is not uncommon in such cases she often wanted to go back to the Lodge, but gradually she accepted her lot, & a precious memory is her statement a short while ago, “This is my home now!” Mum valued her caring Dr & cheerful Care Givers.

We as family will slowly get used to Dad & Mum no longer being with us, but we DO have a wealth of Precious Memories, to draw on often & to share with each other. We owe so much to their Love, & Care through the years. They leave us with Grateful hearts, for an Enduring Example, & for the Security of their Love.