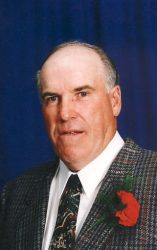 William “Garth” Seafoot passed away at his home near Carroll on September 8, 2012.

It is with deep sadness that we announce the sudden passing of William Garth Seafoot on September 8th, 2012 at his home near Carroll Mb. Garth was born on April 26th, 1936 in Souris MB., fifth child of Fred and Gertie Seafoot. He was raised on the “Old Homestead” farm in Oakland Municipality. Garth was predeceased by his parents, siblings Viola (Mahoney), Ken, Morris, Dodie (Metcalfe) and Cliff. Garth and Wilma (nee Burton) were married in Boissevain on May 11th, 1957. They were blessed with three children: Keven (Terralee (nee Good), Marla (Jack Buchanan) and Gail; their grandchildren: Nicole Kowal-Seafoot (Curtis Tomei), Jordan and Theron Seafoot, Kyle and Connor Buchanan, and great grandson Luca Tomei. Garth farmed with his Dad, Morris, Cliff and Keven. Besides farming, Garth also worked as a surveyor for the Manitoba Highways Department for 35 years and retired in 1991. Following retirement, Garth remained on the farm to enjoy the peacefulness of country living. Garth was a beloved husband, father and grandfather, devoted to his family. Garth loved the game of baseball. Probably the highlight of managing a team was in 1985 when Team Manitoba won the Western Canadian Championship and later that year won the bronze medal at the Nationals in Kentville, N.S. Curling was also an important part of his life. He enjoyed the competitiveness and comradery of these two sports. He played/managed the Riverside Canucks for 41 years (1950-1991). In 1998 he was inducted into the Manitoba Baseball Hall of Fame. Garth took pride in coaching and teaching his grandsons and others in minor baseball the fundamentals of the sport. Other interests were hunting, spending time at the hunting shack with his friends, golfing, yard care and attending curling events and MLB games. Friends and family alike will fondly remember his quick wit and sense of humour. Left to mourn his passing is his loving wife Wilma and family, sisters-in-law and brothers-in-law; Eleanor Seafoot, Doreen Seafoot, Bob Burton, Clair and Judy Burton, Frank and Sandra Burton, Jean Percy, numerous nieces and nephews, relatives and friends. A celebration of Garth’s life took place on Sept 15th, 2012 at St. Paul’s United Church, Souris with Interment at Carroll Cemetery. Donations can be made to the Heart and Stroke Foundation of Manitoba, 6 Donald St. Suite 200 Winnipeg, MB R3L 0K6, or to a charity of your choice.

Earth has one gentle soul less,And Heaven one angel more.