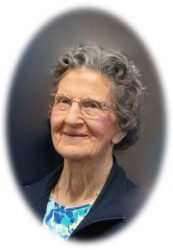 Thelma Mary Basiuk, nee Banks was born October 10, 1929 in Elva, Manitoba. She grew up in Elva with her two sisters, Gwen and Barbara and her brother Ron. Always active, this was before the days of girls playing softball so she played baseball with her brother Ron. Determined that she would play with them, she did not let on how their throws hurt her hand and vowed that she would throw hard enough to make them respect her arm. This throwing arm would be put to good use in later years as a catcher for women’s teams and training up the catching skills of her children.

Growing up in Elva through the 1930’s during a time of shortages fostered in Thelma a deep respect for all resources and abhorrence for any kind of waste. In later years this became known as being sustainable, but she was one of the original recyclers.

She attended school in Elva and then Melita and according to her report cards was an excellent student. Following in the footsteps of her aunt Mary Agnes, Thelma enrolled in the nursing program in the Grey Nuns Hospital in Regina, Saskatchewan and graduated as a Registered Nurse. She worked as a nurse at Indian Head, Saskatchewan and in Huntsville, Ontario before a family illness brought her back to Elva. This was to nurse her brother Ron who was diagnosed with and subsequently died from acute Multiple Sclerosis. This tragedy in the family had a bright side as it brought her into contact with a young teacher who was teaching at the Elva School at the time.

This young teacher was Frank Basiuk of Parkerview, Saskatchewan (an equally small town) who courted Thelma and won her heart. They were married in a small ceremony in 1956 and moved to Manson, Manitoba where Frank had a job teaching. With no hospital nearby, Thelma dedicated herself to looking after the home and to caring for their family, a son Robert born in 1957 and a daughter Karen born in 1959.

Thelma worked briefly as a nurse in Reston, Manitoba but decided that her primary work was looking after the family. Sustainable to the core, she felt that her working would deprive someone else of a needed job in a small town where jobs were scarce and each family needed employment.

Thelma’s commitment to the communities she lived in was unconditional and carried out in a selfless, quiet manner. Whether it was baking pies for the local rink, volunteering to lead girl’s groups (CGIT), driving kids to hockey, band or scouts, she did so willingly. Always active in her church and with the school, she never said no when asked to serve on any number of committees, boards and associations. Her family always came first and she was the foundation of a solid, nurturing family environment that invited expression, but came with obligations, rules and responsibilities. While she never considered herself as worldly, she had a world view through her reading that gave her understanding and her compassion. This world view was further expanded once she and Frank started traveling. First through a teacher exchange to Australia and then later to visit places such as New Zealand, Malaysia, Singapore and the Orkney islands, as well as camping coast to coast in Canada.

Thelma was not one to let anyone sit around and loved to play any sort of card or board game. When everyone was in the house, you did not sit around watching TV. She was always up for a walk, skate, ski or cycle depending on the season. One of her great joys was skating with her grandchildren at the Hartney arena and on the Brandon Oval. She also loved to dance whether participating in square dancing, pattern dancing or simply dancing with Frank at one of the many local socials they attended. A lasting memory will always be their beaming smiles while dancing the hop polka.

She loved sports having played ball and was a great fan of all sports (usually cheering for the underdog, except of course when her children were playing). She kept score watching baseball games and you sat in front of her at your own peril during hockey games (her right leg assisting the goal tender blocking shots and kicking out potential goals).

Through all this, her companion in life was her loving husband Frank. Their marriage was a partnership in every sense of the word with much love, caring and mutual respect.