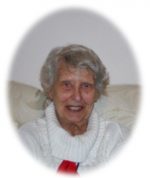 She was born in Eatonia, Saskatchewan in 1926 and lived there until her mother’s death in 1937. She moved to Montreal at that time living with her Aunt and Uncle. Her father continued his farming operations at Leader, Saskatchewan until his death in 1953.

Irene moved to Toronto to study and met Adin while there. They married in 1949 and moved to Winnipeg in 1950 and Irene continued her studies in Education.

In 1955 they moved to Dauphin and welcomed the birth of their son, Vernon.

They moved to Medicine Hat in 1958 and son Randy was born there and the adoption of their two boys, Harvey and Terry and daughter Linda, was finalized during this time in Medicine Hat.

The family returned to Manitoba in 1965. Irene taught school at Melita, Wawanesa and Shilo.

In 1976 the family moved to a farm near Minto where Irene raised Angus cattle, Morgan horses, goats, chickens and turkeys. It was a returning to her roots and she loved the farm and farm life!

Irene served on the local Co-op board, the Manitoba Human Rights Commission and the Manitoba Racing Commission. She was also a member of the Independent Order of Foresters.

Irene was very active in politics and took a keen interest in all things political, locally and globally.

She was an avid traveller and a news hound, reading numerous newspapers daily.

In 2005 Adin and Irene returned to Brandon and have continued to live there.

Life consists of two dates and a dash that represents everything in between.

She will be missed by her family and friends.

There will be a private family interment at the Souris and Glenwood Cemetery.