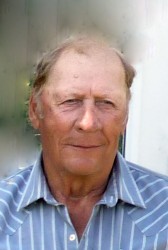 Pierre was the oldest child of 12.  Born August 2, 1928, to Clement and Cecile (nee Cancade) in Grande Clairiere, MB.  Pierre was predeceased by his parents, his brother Jacques, and his sister, Marie Marcq.

Pierre leaves to mourn his brothers; Paul, George, Jean, Roger, and his sisters; Louise, Jeannine, Therese, Agnes, and Lucie.  He also leaves behind many nephews and nieces.

Pierre, along with his brothers, took over the family farm in 1960.  Bodin Bros were well known for importing Gelbvieh livestocks from Europe.  They were recognized across western Canada in Gelbvieh genetics, winning numerous awards.

His desire to lead went beyond the responsibilities of his family and were extended to his community.  As one example, he served as Counsellor for the R.M. of Cameron from 1960-1973.

Although he worked hard and was dedicated to his family and farm, he enjoyed travelling to Costa Rica and spent many enjoyable winters in the sun.

He was a caring and thoughtful man and will be missed by his community, his church, and his family.

The funeral mass was held at the St. Jean Roman Catholic Church in Grande Clairiere on Saturday, October 18, 2014, at 11:00 a.m. followed by interment in the Grande Clairiere Cemetery. In memory of Pierre, donations may be made to the Canadian Cancer Society.