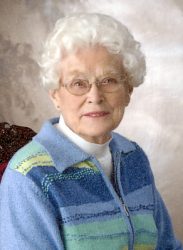 Brown, Ruth Marion passed away at the Souris Personal Care Home on February 19, 2015 in her 98th year. She was born on April 4, 1916 in Morden Manitoba to Ernest and Mary (Bayliss) McElroy. She and her siblings Phyllis, Robert and Ross moved to Souris at a very young age where she started school and graduated in 1937.

In 1939 she enrolled in the nursing program at the Souris Memorial Hospital and graduated as a registered nurse in 1942. Classmates and colleagues would remain friends for life. Ruth began her nursing career at Souris that year and worked there in various positions until her retirement in 1981.

In 1945 she married Harold Arthur Brown. They farmed in the Hebron District. Ruth became a mother to Arva, Lyle and Gail. Her commitment to her family knew no bounds. Ruth and Harold retired to Souris in 1976. She was very active within the community belonging to many organizations. Ruth was a devoted grandmother to her seven granddaughters. Her home was a center of activity on any family occasion. She was the unequivocal leader, mentor and caregiver to our family and she loved it. Always a special treat in the candy dish, cookies in the cookie jar and special cakes on birthdays.

Ruth remained in her home until 2011 when she moved into the Souris Personal Care Home.

Ruth was predeceased by her husband Harold, parents and brothers and sister.

Ruth was dedicated to her profession, her husband, her family and community.