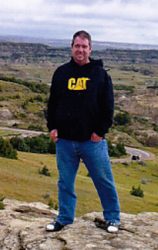 CARLISLE: Darcy Carlisle passed away Saturday, May 14, 2016 at 40 years of age. Darcy was the youngest son of Mickey & Teenie Carlisle. In 2000 Darcy Married Darlene Hardy and together they had 2 wonderful children Dawson and Taylor. Darcy was a fun loving jovial individual. After graduating from Souris Collegiate, Darcy farmed with his parents and brother Darrel. With the selling of the farm in 2011, Darcy started working for Terry Nicol, owner of Cat Country Sand and Gravel. Darcy could not have chosen a better boss. Darcy was always there to lend a hand whenever anyone called no matter what the job entailed. Hockey with son Dawson was a big part of his life. Darcy was a board member of Souris Minor Hockey. He would take both Dawson and Taylor to the Wheat King Games as often as he could. When Darcy was born he was diagnosed with cancer on his adrenal gland. Although grateful he only required surgery and no treatment, little was known at that time this may have lead to his depression, anxiety and addiction later in life. Darcy was predeceased by both sets of Grandparents, Uncles Ivan and John Carlisle, Uncle Fred Kruk, Aunt Margie Eisler, mother-in-law Janice Hardy and dogs Trixie and Oreo. Darcy leaves to mourn, wife Darlene, son Dawson, daughter Taylor, parents Mickey and Teenie, brother Darrel (Lisa) and two nephews Adam and Owen, father-in-law Clair Hardy, brother-in-law Darren (Marsha) Hardy, niece Paige and nephew Zac, many aunts, uncles, cousins and very good friends Kelly and Leanna Fardoe, Terry and Heather Nicol, Craig and Cindy Robins and David Chalmers. Internment took place at the Carroll Cemetery. Pallbearers were Kelly Fardoe, Terry Nichol, Pat Janz, Craig Robins, Garth Wenger and Adam Westburnham. A Celebration of Darcy’s Life was held in the Souris Glenwood Community Hall, Friday, May 20, 2016 with Reverend Don McIntyre officiating. Kowalchuk’s Funeral Home was in charge of the arrangements. Donations may be made to the Manitoba Cancer Society or the AFM Center in Brandon.