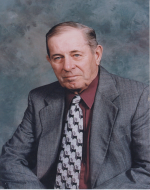 CROSS: Norman Morley (Joe) of Griswold, Manitoba, passed away on Thursday, February 23, 2017 at the age of 81. Joe was born in Woodrow, Saskatchewan on October 29, 1935 to Johnathan (Jack) and Marion (MacIntosh). They moved to the Griswold farm in 1937. Joe went to school in Griswold. He started working on the family farm with his dad and brothers. He enjoyed many sports, curling, hockey and baseball which he played for many years. When Ken started playing hockey he enjoyed helping with the coaching. Many trips were made with the teams. We enjoyed this very much making new friends; it was one big happy family. In the last few years Joe was very proud to watch his grandchildren; Landon and Brittany play hockey and baseball. He enjoyed watching Landon play both live hockey or on TV. He also watched his Montreal Canadians. Joe and Lorna (Orr) were married in Alexander on April 27, 1963. They celebrated their 50th Anniversary with family and friends. Funeral service was held on March 1, 2017 from Griswold United Church with Don Sellsted officiating. Audrey Harrison played the piano and led the choir. Scriptures were read by Marianne Olfrey. Eulogy was read by Stan Cochrane. A Farmers Prayer was read by Darby and Kyle Cochrane. Ushers were Clare Moir and Robbie Willman. Pallbearers were Darby Cochrane, Dwayne Cross, Kyle Cochrane, Jeff Enns, Bob Izzard and Gary Young. Burial was in the Griswold Cemetery. Lunch followed service by U.C.W. Joe is survived by his loving wife of 54 years Lorna; son Ken (Sandra); daughters Sandra, Jody (Peter) Polessolo, grandchildren Landon and Brittany Cross. Joe.’s brothers Archie (Kay), John (Dorothy), Evans (Candice), sisters Win Campbell and Jean Farley, sister-in-law Iris Cross and many nieces and nephews.

Joe was predeceased by his parents, brother Stan, niece Cathy Campbell, brothers-in-law Bill Campbell and Earl Farley. The family would like to thank everyone for all their kindness and support at this time.