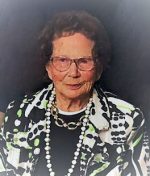 Marjorie passed away peacefully on February 24, 2017 in Souris, Manitoba.  She was born in Vandura, Saskatchewan and moved to Manitoba with her family where she attended school along with her sister, Alice and her brother, Gordon Embury.

Marjorie attended Brandon College where she studied Music.  Returning to Belmont, she played drums and guitar in a “wartime band”, taught piano, provided piano and organ accompaniment at Knox United Church services which included an independent Sunday School, trained vocal performers for solo, duet, and choir performances in the community and Belmont School.  Over the years, Marjorie played for many weddings, funerals, and special baptismal services. Marjorie was an early provider of Music in Health by performing at the Souris Hospital, Victoria Park Lodge, and the Personal Care home where she included residents as participants and ensured she provided their personal favorites.  Her last “formal” performance at Souris Personal Care Home was June 26, 2015 (her birthday) however, she had an audience of residents whenever she played for her own pleasure during her brief stay at Souris Hospital and Personal Care Home this winter.

Marjorie is predeceased by her husband, Lloyd Dandridge, with whom she was co proprietor of both Belmont and Souris Bakeries.  The couple relocated to Souris in 1966 when their business in Belmont was destroyed by fire and they operated the Souris Bakery until retiring in 1976.  While working in both bakeries, a number of young men and women who were employees became her “bakery family”. Marjorie never tired of hearing about and repeating stories of the adventures, the endeavors, and the successes of the bakery family along with their regular visits or telephone calls.  Following her retirement from the bakery, Marjorie worked in a number of positions including Activities Director for two Personal Care Facilities in Brandon.

Marjorie’s family tagged her with several “honorary titles” over the years.  Because she was never still, her own children called her “Mogul” (a steam engine).  She worked long hours in the family business, sewed our clothes, crocheted for family and community members, played piano and organ, was a tireless member of the United Church ladies, and still found time to cook our favorite recipes and to be with us whenever we needed her. Even in adulthood, we believed “Your mother knows what you’re doing!” and she would always respond as if that were true. Her grandchildren dubbed her “Gramog” or “Mum” because she seemed to be ever young and energetic and she repeated all those same activities on their behalf.

In later years, Marjorie pursued board games and became an avid Wheat Kings fan, a passion which she shared with her late grandson, Jaydon.  She enjoyed vacations at Clear Lake with her family, ball games played by her granddaughter, Chelsea, and her grandsons Tye and Andrei’s pursuits in Art and Music Therapy respectively.  She was often attended by her grandson Brodie who she knew had found his niche in a health care profession.  She was especially pleased that her children and grandchildren were formally educated and successfully employed in their particular vocations.  Her grandsons Kelly and Dan, being the first arrivals, along with Zachery, her first great-grand child, brought her great joy and were often in her thoughts although they live at a distance away in Alberta.  Marjorie really enjoyed small children and often asked, “How the little kids were doing?”  She was referring to her keen interest in Maya and Torin who are her step granddaughter Laurissa’s children.