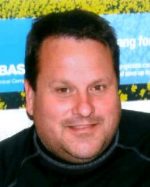 KIRBYSON: Gregory Ross, August 14, 1970 – February 20, 2017. It is with the deepest sorrow that we announce the passing of Greg Kirbyson on Monday, February 20, 2017, at Royal University Hospital in Saskatoon, Saskatchewan at the age of 46 years.

Greg lived life to the fullest and packed a full lifetime worth of living into the 46 years he was given on this earth. Farming was Greg’s passion ever since he was a little boy working on the farm machinery with his dad and grandpa. He was blessed to be able to be involved in the agriculture industry throughout his life, first by farming at the family farm for a number of years, and later in the agriculture services industry. After leaving the farm, Greg moved to Leader, Saskatchewan, to start a new life. He made many new friends in the Leader and Eston areas while he satisfied his passion for farming. He especially enjoyed operating the combine on his friends’ farms during harvest. Greg was a natural athlete growing up, and was a valuable member of hockey teams in Elgin and Souris. He enjoyed playing football with the Souris Sabres high school team. The family would like to extend a special thank you to friends who showed their love for Greg for the assistance and many kindnesses they showed him during his lengthy illness

Remaining to cherish his memory are his mother Fay Kirbyson, his brother Brad (Audrey) and many uncles, aunts and cousins. Greg was predeceased by his grandparents Charles and Doris Kirbyson and Harvey and Gladys Robertson, and his father Robert (Bob) Kirbyson.