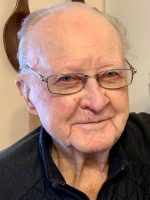 Dad, being  the organized person he was sent me an email in  2019 of suggestions for his obituary. He made sure to say in the subject line not to be alarmed as he was not planning on dieing any time soon! Of course I was relieved and forgot about it until after his death. I could have used it and in fact did use it originally but we all know of all his numerous accomplishments and awards so it just seemed too factual and not about the actual Dad Ferg Devins. So here goes!

Dad was born to Jack and Gretta Devins in Yorkton, Saskatchewan on November 24, 1929.  He was a pretty normal kid until age 9 when he was diagnosed with Osteomylitis. Back then there were no antibiotics so this required surgery at St Boniface Hospital and the fusion of his right hip.  Dad was in a body cast for months!  One of his Mom’s greatest lessons she reiterated became Dad’s mantra, was that if someone else can do the job so can you! Dad took this heart and did not let his disability hold him back.

After finishing school in 1948, dad was hired by the CPR in Brandon only because he wasn’t old enough to get into the pub with his buddies so he walked there and asked for a job! He worked 29 years as a telegrapher, Train Dispatcher and Station agent all over Southeast Sask and Manitoba. There were cars, girls and booze but he finally settled down after he met my mom Betty Ann Ireland at a baseball tournament. They were married September 21,1955. Shortly after being married they moved to Nesbit, then on  to Plum Coulee where they adopted myself and my brother Kent. We lived there for a  few years before moving  to Bosissevain then finally settling in Souris  in 1971. At age 45 Dad made the decision to work for himself, he went into the Real estate and insurance business before finally retiring .

After retiring Dad embraced the age of technology , he took courses at Brandon University to become proficient.He went on to pirate many CD’s , many of which you found under your windshield

Dad thoroughly enjoyed his retirement, he and my Mom loved to travel to Mesa, Arizona and he practically lived at the golf course!

One of Dad’s many projects was the Souris Railway Museum, although Dad was diagnosed with stage 4 cancer he had a dream and with many other volunteers  made it become true by following  his heart. I truly believe  this kept him alive  even after stopping  cancer treatments

Dad was a character, ranging  from his fright nights at the old farm, to teasing and tormenting his nieces , nephews and cousins .  Dad really enjoyed spending time with his grandchildren Emily Logan and Devin Barrett until his last days.

Dad left a legacy of community mindness and volunterism, he was recently a proud Honor 150 recipient in which he was recognized by the province  for his outstanding and  lasting influence on his chosen volunteer organizations and social groups.

Dad had numerous health issues through out his life, but he never felt that he missed out and this did not hold him back from contributing.  The guy had a least nine lives and went out on his own terms saying goodbye to those close to him in his last week.

Predeceased by brother Ed and brother in laws Dennis, George and Don and sister in law Marie.

To us you were so special

What more is there to say.

Except to wish with

That your memory is our keepsake

With which we’ll never part.

God has you in His keeping,

We have you in our heart.