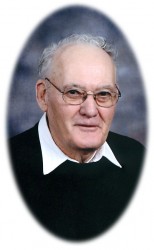 EDGERTON – It is with deep sadness in our hearts we share the loss of a dear husband, father, grandpa and great-grandpa Laurence Melbourne Edgerton (Laurie) who left us on Sunday, February 3, 2013. Laurie was born on the family farm on April 16, 1925. He was the youngest son of Charles and Jemima Edgerton. He attended Lily and Botony Schools where he made several long time friends. Laurie started his lifelong career of farming with his father. Laurie met his soul mate Margaret (daughter of Cliff and Rita Wiig) in Souris and they were married in October 1949 and were blessed to have 64 years together. Laurie and Marge enjoyed farm life and shared this joy with their children Bill (Bobbi), Bob and Ardelle (Blair Woods), grandchildren Jaimie (Luc Aubuchon), Jamie (Jen), Kelin, Meghan, Brooks (Shealynn) and Hilary and great-grandchildren Erika, Lily Mae, Wyatt and Dylan. During his lifetime Laurie had many accomplishments. He enjoyed over 30 years of square dancing and served as president of the Manitoba Federation of Square Dancing, a member of the Independent Order of Odd Fellows, a founding member of the first Souris Credit Union, past president and board member of the Souris Fellowship Centre and member of the Manitoba Shorthorn Association. Both Laurie and Marge took great pride in their accomplishment on the reopening of the Victoria Park Lodge. Together they spent countless hours working, providing meals and enjoying the new friendships made and long time friendships rekindled while working so hard in this endeavour. Laurie was very proud to be a member of the board for several years and to see their hard work and dedication to this effort being enjoyed by seniors of our community. He was a farmer through and through. His hard work, dedication and honesty will be remembered by his family and friends. He was extremely proud to receive the Century Farm Award in 2004 which he shared with his family. This award represented six generations of the Edgerton family farming this land. Laurie was known as an avid card player. His joy of winning was nurtured over time on the farm playing with neighbours and family and continued when he and Marge moved to Souris in 2005. His evenings were complete when they entertained friends with cards and popcorn. Laurie was a proud man, proud of his family and his farm. He was predeceased by his parents Charles (1972) and Mima (1982), brothers Cliff (1987), Kenneth Bruce (1916) and sister Elva McCulloch (2008). He is survived by his immediate family and several nieces and nephews who can recall many memories of time spent on the farm with Laurie. Family and friends gathered at a memorial service held February 7, 2013 at St. Paul’s United Church with grandson Brooks Woods serving as urnbearer and Rev. Wendy Rankin officiating. A family interment took place at the Souris and Glenwood Cemetery followed with a lunch and time of fellowship and sharing memories in the church auditorium. Kowalchuk’s Funeral Home was in charge of the arrangements. Donations in Laurie’s memory may be made to Westman Dreams for Kids or Souris Palliative Care. “He will be forever remenbered in our hearts.”