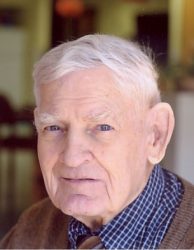 LOVELACE – Harold Wesley “Chid” Lovelace passed away peacefully at the Souris Personal Care Home, Saturday, January 26, 2013 with family by his side. Chid was born October 6, 1922 in Souris, MB to Sydney and Edith Lovelace. Dad lived in Souris until the CPR closed down its division office forcing his Dad, a railroader, and his family to move to Winnipeg. Here he completed his high school at Daniel McIntyre and onto Success Business College where he acquired his vast knowledge of shorthand which he still used daily. As W.W.II broke out he enlisted in the Air Force and due to a medical condition he was grounded from flying and was posted to Suffield Base in Alberta. After the war, Dad returned to Souris and worked for Murray’s Garage as Parts Manager. He caught up with old friends, one being Aileen Lovatt, a pretty young nurse from the hospital. He convinced her to go out with him and they were married October 2, 1948. Along came three daughters and our very special memories of trips to Oak Lake and who could see the lake first. Songs along the way, “You Are My Sunshine,” “I’ve Been Working on the Railroad,” and tents built for us on the beach. Dad continued at Murray’s and later became a school bus driver. Dad and Mom enjoyed many trips to Arizona and truly enjoyed their home at the “Edge” where he could putter and acquire all the “miscellaneous” items he could. Dad took great pride in his seven grandchildren and two great-grandchildren and all their varied interests. He loved children and they were always excited to see what coin he could produce from behind their ear and the funny under the chin wave he would greet them with. Dad was predeceased by wife Aileen and his siblings Connie, Ed, Floyd and sister Dorothy and very special nephew Ron Banting. Dad will be lovingly remembered by daughters Pauline and Blaine Canning, Carolynne and Bob Russell and Brenda and Brian Green and especially remembered by Angela, Roger, Ellamay and Adeline, Michael and Jessica, Melanie and Mario, Amy, Victoria and Adam, Mathew and Melissa, Jenna and Lee and special friend Ivy Watkin. The kiss of the sun for pardon The song of the birds for mirth You are closer to God in the garden Than anywhere else on earth.