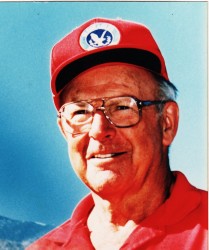 On Dec 28, 2013 Harry Forrest passed away at the Souris Personal Care Home at the age of 97 years. Born in Souris on April 16th, 1916 Harry lived his entire life in Souris except for his service with Royal Canadian Air Force during WW II.  The youngest child of a family of six, Harry had five older sisters: Kate, Mary, Grace, Margaret and Helen all of whom have predeceased him, as have his parents, Samuel Henry “SH” Forrest and Grace Helena Woodhull.

After finishing high school in Souris, Harry studied law, graduating from the University of Manitoba in 1938 and immediately joined his father in what became the Forrest & Forrest law office at Souris which his father had begun in 1907. His son, Brian, joined the firm in 1973 and continued the practise until the firm was sold in 2011. This brought to close 103 years of the Forrest law practise.

During the early years before the war Harry took the train to Melita (and later to Reston) where he had satellite offices and it was while in Melita that he was introduced to a young school teacher, Agnes Sellers, by Melita’s mayor, Bill Pound.

He enlisted in 1941 in the Royal Canadian Air Force. Following his training, he was sent overseas in 1942 in the hold of a New Zealand butter boat. There he was stationed on the English coast operating costal radar stations and later worked with mobile radar units which moved from Holland to France and finally Germany. On the day Paris was liberated Harry happened to be in that city and fate would have it that he ran into another Souris soldier.

In October of 1945 Harry returned to Canada and asked that school teacher, Agnes, to meet him at the train station in Winnipeg and that led to their marriage in July of 1946. They quickly settled into domestic life in Souris, raising four children: Helen, Brian, Jean (Stan) and Karen.  Later four grandchildren arrived: Chris, Jim, John and Fiona. His wife Agnes predeceased him in 2002.

Harry joined the Masonic Lodge, Souris Curling Club and Golf Club and was a founding member of the Mouse Investment Club. He was a lifelong member of St. Paul’s United Church. He served as town solicitor for many years and was a School Trustee during the consolidation of the country schools and the building of the Souris School in 1963. In 2013 he received his 60-year membership pin from the Souris Legion.

Highlights of each year for Harry were attending the Manitoba Curling Association Bonspiel in Winnipeg, the annual Souris bonspiel and later the Labor Day golf tournament in Minot. In later years annual winter vacations in Florida and later Palm Springs were much enjoyed with Souris friends.