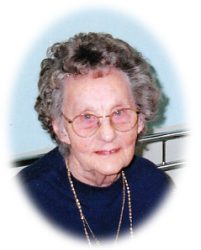 Gerow, Verlena Rosetta: Peacefully on October 22, 2015 Verlena passed away at Fairview Home with her family by her side. Verlena was born June 5, 1922 at Fairlight, Saskatchewan, the eldest of three children to Fred and Harriet Richardson. As a young child they moved to a farm at Alexander, Manitoba where she attended school to Grade 9. She then went to work at various farms, the Holms, Robinson’s and at last the Gerow farm at Beresford, Manitoba where she met Garfield. On October 16, 1944 she and Garfield were married and resided on the family farm until retiring to Souris in 1984. Life on the farm was very busy and rewarding. She milked cows, had a huge garden which she shared her bounty. She sewed many costumes for Christmas concerts at the one room school. Also very involved with Beresford United Church teaching Sunday school, helping with teas, showers and weddings. She received a Life Membership from Beresford U.C.W. She and Garfield loved their Friday night card club with neighbours. After retiring to Souris in 1984 she was an avid volunteer for the Adult Day Program, Hillcrest Museum, and Souris Fair Board. She received many first place ribbons for her flowers. Quilting was also a favorite past time, all the family received a quilt. She also helped quilt the Butterfly quilt that hangs in the Hillcrest Museum. In 1999 she was nominated as a Special Older Person and her picture is displayed on the Wall of Honor in Baldur. She is survived by Dorothy (Dennis) Johnson of Sandy Lake. Grandchildren; Angela (Rick) Kozak, Michelle Johnson (Murray), Neil Johnson and Ryan Johnson. Great Grandchildren; Alexandra (Peter) Kuefler, Michael Lewandoski (Nikki), Zachary Johnson and Hailey Johnson. Great Great Grandchildren; Easton, Bennett and Charlotte Kuefler. Sister Eva Sexsmith, numerous nieces and nephews, and lifelong friends. Verlena was predeceased by her husband Garfield in 1992 and brother Allen Richardson. Funeral service was held at Kowalchuk’s Funeral Chapel, Souris on Monday, October 26, 2015 with interment in the Souris & Glenwood Cemetery. In memory of Verlena, donations may be made to the Souris Personal Care Home Courtyard Fund c/o Prairie Mountain Health Box 10 Souris, Manitoba R0K 2C0 or to a charity of your choice.