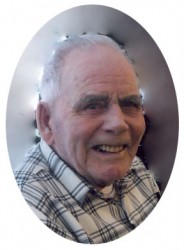 Harvey was a man of many occupations. He farmed for many years and also drove a school bus in Hartney. He was a member of the Manitoba Police Association and did policing in both Hartney and Glenboro. He worked with the Manitoba Fire Commission and was Fire Chief in Glenboro. He was a life member of the Royal Canadian Legion. Harvey loved animals and instilled that love of animals in his children. He especially loved his horses and enjoyed showing them at Country fairs and parades.

The family would like to thank Dr. Cram and all of the staff of the Hartney Health Center for all their special care and devotion over the past eleven years.

Harvey (Dad/ Grandpa) will be greatly missed by all.

In lieu of flowers donations can be made to the Hartney Community Health Center, Hartney Manitoba