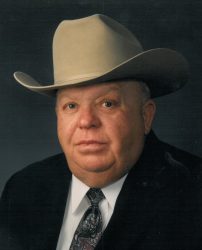 Robert (Bob) Henry Gordon, beloved husband, father and grandfather passed away peacefully with his family by his side on July 29, 2016, in Boissevain, Manitoba, Canada. Bob was born November 13, 1932, in Oak Lake, Manitoba to the late Henry and Ella (Ronberg) Gordon.

Growing up in the 30’s, Bob loved the country lifestyle and farm life and at an early age he had a dream of becoming a registered livestock breeder. His interest in 4-H started as a young boy and continued throughout his lifetime.  He exhibited his first steer at the Brandon Winter Fair in 1946 and sold him for $0.16/lb. Bob’s determination to show steers resulted in him riding in the rail box car 1,500 miles to the Toronto Royal Show in Ontario to exhibit steers.

Bob’s family moved to Souris, MB in 1955 to the Hume farm which became their homestead. He married Joyce (Honeyman) of Hayfield, MB in 1959. In 1961, his family was in the dairy business shipping milk for 10 years.  Then Bob and his brother Wayne formed Kinnaber Cattle Co., establishing their Shorthorn operation. Bob took a risk purchasing a large framed white Shorthorn bull “TPS Coronet Leader 21st”, who generated a new era in the Shorthorn Breed.  Bob was named “Builder of the Shorthorn Breed” in 1970, an honor he always cherished. He was instrumental in forming the Canadian Shorthorn Lassie Organization and served as director and president of the Manitoba Shorthorn Club. The Shorthorn days were exciting times for Bob, leading the Gordon’s to become regular suppliers of Shorthorn bulls to large American ranches. One of  Bob’s proudest accomplishments was breeding and exhibiting the Grand Champion Female at the prestigious National Western Stock Show, Denver, CO, (1969, 1970, 1971), along with Reserve Champion Female (1970, 1971), plus showing champions at Chicago International Livestock Show in 1968 and 1969. Bob was honored to judge many livestock shows including the Canadian Western Agribition, Toronto Royal, many 4-H achievement days and U.S. state fairs.

After traveling to the Midland Test Station, Billings, MT in 1968, Bob saw the first half-blood bull and anticipated the need for Simmental cattle in Canada. In 1969, Bar-5 Simmentals, Brandon, MB, was formed with Bob as the first president. Bar-5 Simmentals seedstock became sought after across North America. At this time, Bob initiated the importation of Simmental cattle from Europe. Achilles Cattle Co., a marketing group was formed and Bob was hired as manager to promote and sell Simmental semen all over the world.

In the 70’s, the Hereford herd was established when his children’s love for showing cattle developed and together as a family they logged many miles showing at junior and Hereford shows across Canada. Bob strongly believed in youth and during his role as director on the Canadian Hereford Association Board, he initiated the formation of the Canadian Junior Hereford Association (CJHA) and hosted the inaugural CJHA event at Kinnaber on August 12, 1979.  Kinnaber Cattle Co., became well-known for breeding top Hereford cattle and the family enjoyed many years in the Hereford breed, but dispersed the herd in 1983 as the children started their college education.

Bob was intrigued by the Angus breed and developed a small herd he enjoyed. Then with his astute cattle knowledge of all breeds, Bob was named “Sire Selector and Manager of the Beef Program for Western Breeders and Alta Genetics, Balzac, AB,” in 1985. Together, Bob and Joyce travelled Canada, the U.S., and Europe extensively seeking breed leading herdsires in the beef industry that were right for the times. Through their travels they developed lifelong friendships in the cattle business.

Bob demonstrated a lifelong commitment to advancement of agriculture and served as role model for others. He served on many boards and associations, such as the Manitoba Cattle Producers Association, which initiated the Douglas Bull Test Station, where his foresight and involvement along with his fellow cattlemen helped to move the cattle industry forward.

For years, many cattlemen encouraged Bob to write about his cattle knowledge. In 2003 Bob and Joyce wrote, “A Cattleman’s Walk Down Memory Lane”, chronicling their lifelong experiences in farming and the livestock industry.

Bob and Joyce retired to Boissevain in 2008.

In memory of Bob, donations may be made to Bob Gordon Memorial Fund with proceeds going to youth and agriculture endeavors, Box 605 Boissevain, Manitoba R0K 0E0.