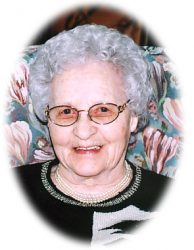 Hardy, Pauline passed away peacefully March 25, 2013 at the Hartney Health Center. Pauline was born December 25, 1914 and was the daughter of George Gartner and Elizabeth Stang of Primate, Saskatchewan.  Her Mother died when she was two and one-half years old.  She came to Hartney in 1939 and was a cook at the Hartney Hotel with Sam McBride. In 1941 she married John Gibson, son of George and Kate.  John developed Multiple Sclerosis and died September 7, 1970.  After John’s death Pauline began working at the Hartney Hospital where she met Paul Hardy as he was visiting his Mother. Pauline and Paul were married August 24, 1973.They lived in Grand Clairiere and farmed for two years and then moved into Hartney and then farmed from town. In 1981 they bought and moved a house onto a lot in Hartney.  Pauline and Paul enjoyed taking trips, camping, and fishing. Paul passed away January 27, 1991 in Victoria while on a trip. Pauline continued to live in her homes until February 2008 as then she moved into Hartney Health Center as a resident.  She enjoyed visits with friends, coffee at the Red Door CafÃ©, Hymn Sing and the many outings with Carol in the handy van.  She could often be found reciting nursery rhymes or singing hymns.She is survived by her brother Jacob(Jack) Gartner his wife Alice and their daughter Darlene. Funeral Mass was held Thursday, March 28, 2013 at St. Jean’s Catholic Church with Fr. Geoffrey Angeles officiating and Deacon Murray Teetaert co-celebrating.  The Pallbearers were Ryan Gibson, Francis Hardy, Gerry Hardy Glen Forbes, Arnold Hicks, and Gaston Boulanger.  Interment was in the Grand Clairiere Cemetery.