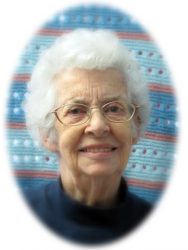 Hintz: Marion Ethel died, in her 86th year in the Souris Personal Care Home, Souris, Manitoba, on August 25, 2013 after a long period of ailing health. She was born in the Souris and Glenwood Hospital on July 25, 1928, the second daughter of Thomas and Edith Doherty.

Marion completed her primary and secondary school education in Souris and following summer school training taught school near Rivers, Mb. and subsequently at Carroll. She completed her Degree in Education at Brandon University in 1967.

In 1951, she married George Maxwell Brown of the Whitefield District and they had a son, Robert. They later divorced and in 1975 she married Rueben Hintz of Souris. Rueben sold his farm north of town and became a school bus driver. He and Marion enjoyed many happy times dancing and taking in baseball tournaments and horse racing events. Rueben predeceased her in September of 1988.

Marion was a member of the Rebecca Lodge, United Church, the Royal Canadian Legion Women’s Auxiliary and a supporter of the local Fellowship Club and regarded Souris a beautiful town to call home.

Donations may be made in memory of Marion to the Parkinson Society Manitoba or a charity of choice.