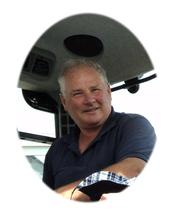 Jimmy was the son of the late James and Janet Ritchie, seventh of a family of nine. Growing up in Ayrshire, Scotland, he developed an interest in machinery and started a successful custom farming business.

On November 4, 1982 he married Mary and together the worked towards owning their own farm, immigrating to Manitoba in 1994. Jimmy realized his ambition when the family moved to their farm near Souris the following Year. His family and farming were his passion. Jimmy enjoyed meeting with neighbours and friends and comparing farming practices between Scotland and Canada. He enjoyed watching his family grow and was very proud of his three children and was a devoted Grandpa to Jacob.

He enjoyed travelling and travelled around the world visiting family. He enjoyed trips to Germany a number of times to visit factories producing agricultural equipment. His hobbies included boxing, motocross and watching his family play rugby with the Souris High School teams and the Brandon Barbarians, Jimmy was a past Chairman of the Westman Scotish Association.

He was predeceased by both parents and sister Norma. Survived by his wife Mary (Strang), daughter Barbara (Craig Barker); sons Jim Jr. (Bridie O’Hara) and Andrew (Dayna Powers); dear Grandpa to Jacob and ‘Jim” to Logan.

Laid to rest in Souris and Glenwood Cemetery.

Jimmy was  determined, devoted and disciplined throughout his life.