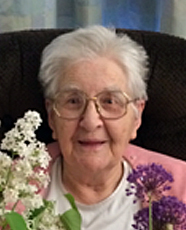 Ruby Jasper (nee Abrey) –  Ruby passed away peacefully on Christmas day, 2016 at her home at Hartney Personal Care Home, at the age of 97. Ruby was born at home January 16, 1919 to Fred Abrey and Olive Saban. She was the third of four children. Ruby married Clinton Jasper in 1939 and together they farmed a one section mixed farming operation. Here, also, very capably and with much love, they raised a family of eight children. Nothing was more important to Ruby than her family. She was always very interested in new arrivals of grandchildren, great-grandchildren and great-great-grandchildren. Christmas was her favorite time of year and for sixty seven years, until moving into Cameron Lodge in 2006, she hosted Christmas in her own home. Surviving Ruby are her children, Olive Love (Ron Auschstetter), Marion (Pete) Masson, Claris (Jack) Isabey, Marjorie (George) Cantlon, Don (Sandra), George and Philip (Katharine), 16 grandchildren, 26 great-grandchildren, seven great-great-grandchildren, her sister Irene Olmsted, sister- in-law Claris Deleau and several nieces and nephews. She was predeceased by her parents, husband Clint (1968), son Jim (1975) and brothers Russ and Tom. Ruby retired from the farm to Hartney in 1979. She enjoyed gardening, taking special pleasure in  her roses, lilies, and other flowers. She also enjoyed embroidery work and crocheting and knitting. Every family member has at least one afghan to remember what her busy hands  accomplished. We, her family, have many special memories of our mother, grandmother, mother, sister and auntie. How blessed we were to have had her with us for so long – and now we have our very own Christmas Angel. Sincere thanks go to the caring staff for their loving care of our mother while she called Hartney Personal Care Home her home since 2013. A private memorial service was held on December 30. Burial took place at the Hartney Cemetery. Donations in Ruby’s memory may be made to the Hartney Community Health Centre.