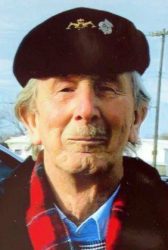 Roy Banks – It is with a deep sense of loss that the family of Roy Banks announces his passing on December 29, 2016 at the age of 87. Roy was born September 2, 1929, in Rotherham, Yorkshire, England, the youngest of a family of eight. At the age of 14 during the Second World War he left school to help with the war effort and was assigned to Aerodrome Bomber Command. At 15, he joined the Civil Defense helping to put out incendiary bombs dropped by German bombers to light up the nearby steel works and helping to dismantle bomb detonators. In 1947, he was called up for National Service. Due to his experience with explosives, he was assigned to the Royal Engineers Scottish Command-Bridging and Bomb Disposal Unit, serving for two years until he was demobbed. In 1952, he was called up again to train for the Korean War but was not required to deploy. After leaving the forces Roy became a Journeyman Painter and Decorator in his hometown of Rotherham, where at a dance he met the true love of his life, Betty. They were married in December of 1952.

In 1980 they moved to Canada residing in Red Deer, Alberta for a few years and then moving to Elgin, Manitoba to be closer to family and where he realized his dream of having his own painting and decorating business. Roy’s sense of adventure and passion for travel began back in the early years of his 58 year marriage to Betty. They travelled the UK, spending many weekends camping and continued to travel extensively once in Canada.

Roy enjoyed music, and teaching himself to play the keyboard. He also loved to dance, whether it was square dancing, ballroom dancing or just two-stepping.  He made many friends at dances and socials all across South Western Manitoba. He also had a passion for antique cars and would often be seen at car shows  or zipping down the highway in his pride and joy, a 1954 red MG TF.

Roy was predeceased by his wife, Betty, and his brothers, Eric, Douglas, Ronald, and sisters Doris, Hilda and Olive. He is survived by one sister, Lillian, and by many nieces and nephews in the UK . In Canada he was predeceased by brother-in-law, Donald Rolfe and sister-in-law, Rita Rolfe. He is survived by nephews David Rolfe (Fay), Stuart Rolfe (Leanne), great nephews and nieces Andrew Rolfe (Desiree), James Rolfe (Shanda), Amanda Rolfe, and Brayden Rolfe .

Uncle Roy will be forever missed and always in our hearts.

A memorial service was held at Kowalchuk’s Funeral Chapel in Souris on Saturday, December 7, 2016 with Rev. Don Oddie presiding. Interment of ashes is to be at a later date.

Donations in Roy’s memory may be made to the Canadian Cancer Society.