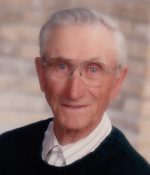 Just three months short of his 104th birthday, our Dad and Grandpa passed away peacefully on May 29, 2018 at Valleyview Care Centre, Brandon, Manitoba.  Wilfred James (Jim) King was born on September 1, 1914, the second child of a family of seven and first son born to Alfred and Mary King.   At the time, Alfred was working for Sandy Taylor in the Underhill area and Jim was born on this farm, in a granary, the only place that was available for the young family to live.  Perhaps it was this humble beginning that set Jim on the course of his life’s work, that of being a farmer.  The Kings relocated many times during the early years until 1933 when the family settled on the A.R. Welch farm, SE 11-5-21 in the Croll/Elgin area.  Jim worked on the farm during the summer and in the winter years (1940s) worked at the Joseph Iron Mine in Ontario.   In 1949, he met Joyce McAuley, a young telephone operator who had moved to Minto.  In March of 1951, they were married and she remained the love of his life for the next 65 years.  Together, they took up residence on the home farm.  In 1955, their daughter Kathie was born, followed by their son Fred in 1958.  Jim farmed with his brothers, George and Charlie but by 1969 was working on his own.  In 1983, he and Joyce retired to Hartney and lived there until 2007, when they moved to Brandon.  Our Dad and Grandpa has left us with love, laughter and legacy.  He loved the land, his family and was so content with his life.  He loved to dance, he loved a good joke and loved to visit with people.  He showed us how to be content with what you have and how to live a good and happy life.   That is his legacy.  Jim is survived by his daughter, Kathie, his son Fred (Sandra), his precious grandsons, Sanfred and Wheaton(Carlie), sister Margaret Flintoff, and brother Charlie King(Doreen), brothers-in-law Allison McAuley(Trudy) and Walter McAuley(Dianne), along with many nieces and nephews.   Jim was predeceased by his beloved Joyce (nee: McAuley), parents, Alfred and Mary King, sisters Vera Young, Gladys Taylor and Mary McCosh and brother George King; brothers and sister in-law, Roy Young, Tom Taylor, Oly McCosh, George Flintoff, and Marjorie King, and a nephew Norman Taylor; in-laws Flossie and Eric McAuley, brother and sister-in-law Lind and Ethel McAuley, and a niece Karen McAuley.    We would like to thank the staff at Valleyview Care Centre for their excellent, loving care of Jim, Dr. D. Caplan who truly understands the elderly, and special thanks to Jim’s niece, Isabelle Popple, who faithfully visited and took her Uncle Jim on a marvelous journey of remembering his youth, and testing his memory on the history of an era.   Celebration of Jim’s life will be held at the Centennial Centre, Hartney, Manitoba on Saturday, June 30, 2018 at 11:00 a.m.  Private internment in the Riverside Cemetery, Hartney.   In memory of Jim, donations may be made to the Valleyview Residents Van Fund or to a charity of your choice.