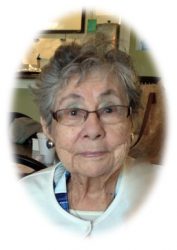 Stephenson: On July 14, 1926, Isabelle Eva Hamelin, wife of the late Mart Stephenson, was born on a farm near Jasmin, Saskatchewan. Schooling was in a two room brick school, St. Joseph de Dauphinais, District No. 17. The last born of 13 kids to Suzanne and Albert Hamelin, Isabelle left the farm at the age of 17 and went to Carberry, Manitoba to work at the Chinese restaurant. One of her sisters was already living and working in Carberry. She later moved to Souris because she heard from her friend, Bessie Caughill, who she originally met in Carberry, that there was work at the Chocolate Shop. In Souris in 1946, she met the love of her life, Mart Stephenson on a blind date and they were married on February 12, 1947. She was raised in the Catholic faith but joined the Anglican Church in 1947 because that was where Mart was attending. She was a faithful member there, helping at many functions. She was a woman of strong faith. She was predeceased by her parents, her beloved husband of 61 years and all her brothers and sisters.

Isabelle was a charter member of the Legion Auxiliary since 1959, long time member of I.O.D.E. until it disbanded in 1990, member of the Hospital Auxiliary and the Drop In Center. In the Drop In she was news correspondent for about four years and was president for a two year term. Her and Mart also looked after shuffleboard for nine years, playing as well. She was president of the Souris Fellowship Club for nine years. Isabelle also worked for many years at Tanguay’s with her good friend Shirley Newton.

Isabelle and Mart travelled to Brandon weekly to bowl for 19 years. She loved to play cards, especially bridge and did that regularly until about a year ago. She enjoyed travelling and liked doing home care for the elderly and spent 12 years doing that for one lady in Souris. She enjoyed many years travelling with her husband, Mart, and close friends Doug and Edwena Currie. She was credited with starting the Strawberry Tea over 50 years ago when it was first called the Peony Tea. It was held in Mrs. William’s yard and later in Mrs. Stewart’s yard (June Kowalchuk’s mother). The Hospital Auxiliary took it over and it is still going. Her family meant a lot to her and her only regret was not seeing them as often as she would have liked.

Cremation has taken place. Funeral service was held at Kowalchuk’s Funeral Chapel with ashes interred beside her beloved husband in the Souris and Glenwood Cemetery.

Donations, if so desired, maybe made to the Souris Beautification c/o Municipality of Souris-Glenwood Box 518 Souris, Manitoba R0K 2C0 or a charity of your choice.