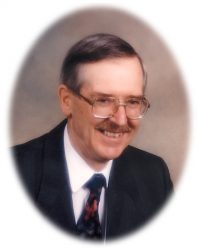 Laval: Paul Andrew. On July 7, 2015 with loved ones holding his hands, Paul left us for a place that is now more peaceful for him. He was born October 18, 1933, at his paternal grand-parents farm near Wauchope, Saskatchewan, the oldest of six children of Leon and Cecile Laval. In 1943, the family moved to a farm south of Deloraine, Manitoba, where Paul went to Brock School, then high school at Deloraine Collegiate. After teaching one year on permit he attended Normal School in Winnipeg in 1953-54. His teaching career consisted of 8 years at Margaret and 26 years in Souris, retiring as Vice-Principle in 1988. Paul was a staunch supporter of the community of Souris. He was a member of the Kinsman Club of Souris and was honoured with a Life Membership of the National Association in 1975. He served 11 years on the Souris Parks Board, worked on Town Beautification and was a dedicated board member of Souris Hillcrest Museum. Carpentry was one of Paul’s hobbies. He also enjoyed golfing, curling and playing pool at the Men’s Club (all of which he said were Rae’s “sanity time”). Camping, fishing and cross-Canada travels with his family and square dance friends, gave him many happy memories. Paul was a talented musician, playing piano, sax and accordion and sang with St Mary’s Catholic Church choir for many years. His singing voice was a benefit to him, when after many years of square dancing he learned to “call” so that he could teach the activity to students at Souris School. Following retirement, he became a club caller and over the years called for several clubs in western Manitoba, the last ones being Hamiota and Brandon. Paul is survived by his loving and devoted wife, Rae, daughters: Debra, Corinne (Ray Voeller), Brenda (Scott) Rose, Andrea (Darrell) Derkach. 7 grandchildren; Christopher and Elizabeth Bolt, Kelsey Rose, Taylor (Kelsey) Sunaert, Jenna, Matthew and Steven Derkach. Also mourning his passing are his siblings Lionel (Yvonne), Lucille Le Cunff, Raymond (Phyllis), Elaine (Lyle) Franklin; sister-in-law Evelyn Laval  and many nieces, nephews and friends. He was predeceased by his parents, brother Francis, brother-in-law Macel LeCunff and son-in-law Al Searle. In memory of Paul, donations may be made to the Souris Hillcrest Museum Box 1287 Souris, Manitoba R0K 2C0 or to the Alzheimer Society Unit 4B — 457 9th Street Brandon, Manitoba R7A 1K2.

THOSE WE CHERISH WILL LIVE ON IN OUR MEMORIES