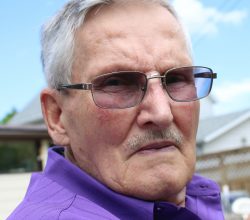 With our great sadness and sorrow in our hearts, we announce the passing of Gordon Donald Lowe with family by his side, Sunday September 13, 2015.

He will be sadly missed and never forgotten by all family and friends.

Gordon was born June 2, 1934. He was raised on a farm in Sandy Lake, Manitoba and his brother and he attended the providence school.

He met Deanna Pulver in Hamiota, Manitoba and was married in 1960. They raised 4 children in Souris. He has 6 grandchildren, numerous nieces and nephews, brother and sister-in-laws.

Gordon had various jobs, working in mines, driving gravel and fuel trucks. He became manager of Anglo Farm Center in Basswood then became manager of bulk fuel plant in Souris. He then operated Gordon’s Tire and Muffler service until 1988.

He enjoyed a good joke and loved to tease others. He also enjoyed the outdoors, camping, fishing, sports such as baseball, hockey, curling and golfing. He was a member of the Kinsmen, Royal Canadian legion and Golf club.