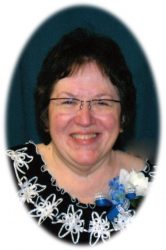 Debra Good passed away September 16, 2015 at the Brandon Regional Health Centre. Debra was born in Pincher Creek, Alberta on December 11, 1959. She was the 2nd of 4 girls for Glen and Betty Fitzpatrick. The family moved to a farm near Dunrea, Manitoba while the girls were still young. Here Debra learned how to run all sorts of farm equipment, but she truly enjoyed doing more domestic projects like cooking and sewing. Debra attended and graduated from Wawanesa Collegiate and went on to further her education at the University of Winnipeg, University of Brandon as well as ACC. She continued to educate herself throughout her life with a variety of classes from accounting to cake decorating to carpentry. While working at E. Bain Jackson & Son of Wawanesa, Debra met Bill the love of her life. Deb & Bill married on March 28, 1987. Together they raised four sons, Barry, Craig, Derek & Glenn on the Good family farm outside Souris, Manitoba. Together Deb and Bill worked hard at making a living and raising their family. They shared a lot of laughs and have a lot of stories to tell. Debra joined the Owens Hospitality Group where she worked for 22 years until the time of her passing. Once the boys were grown and on their own, Deb and Bill spent a lot of time driving the countryside. You never knew when they would be on your doorstep, Deb always had something for you whether it be fresh eggs, baking or a special trinket. Deb and Bill spent a lot of time with their grandchildren and she was so proud of all of them. Debra loved her family and getting everyone together for a festive meal. She was a great cook and you could be assured no one was leaving hungry. Although Debra went through so much this last year, she never complained and never gave up right to the last day. Debra cherished her family and her friends and kept in close contact with them all whether it be a phone call, a thoughtful note or surprise gift. She was very giving and caring. She will be missed. Debra was predeceased by her father Glen Fitzpatrick, father-in-law William Good and mother-in-law Helen Good. Left to mourn Debra is her loving husband of 28 years Bill Good. Sons: Barry (Laura) grandsons Braeden and Josh, Craig, Derek (Stephanie) grandson Cash, Glenn (Kelsey). Her mother Betty Fitzpatrick, sisters Juanita McNish, Glenda (Lyle) Laird and Wendy Fitzpatrick. Sister-in-law Barb (Ken) Falloon. Nieces and nephews: Stacey (Tom) and Chad McNish, Aley and Riley Laird, Lindsay (Jonathan) Filewich and Chris (Denika) Falloon. The funeral service in honour of Debra’s life was held September 22, 2015 at St. Paul’s United Church in Souris, Manitoba.  Donation in memory of Debra may be made to the Cancer Care of Manitoba or to the Souris Hospital Palliative Care Fund c/o Prairie Mountain Health Box 10 Souris, Manitoba R0K 2C0.