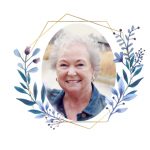 It is with deep sadness that we announce the passing of our beautiful and loving mother, grandmother, and wife. For Gwen, a devastating twist of fate came suddenly the night of June 26th when she was taken from us by a tragic motorcycle accident.

Gwen will be deeply missed. The world certainly lost an elegant woman who inspired many with her caring personality, ability to make anyone feel welcome, and her infectious smile.

Gwen was born in Souris on April 14, 1949. She lived her early years in Carroll and graduated from high school in Souris. From a young age Gwen loved to care for people, candy striping at the old Souris Hospital in her teens. After high school graduation, Gwen attended Nursing school at St. Boniface Hospital. Gwen and Glen began dating during those years. She graduated in the spring of 1970 and they were married that same summer.

Gwen started her career at the Souris Health District, hired as a general duty floor nurse. She then took on a new role as head nurse just prior to the new Souris Hospital opening its doors in 1973. Gwen took her OR training, and mentored at the Brandon General Hospital. She developed a passion for surgical nursing, and after having children began to work more strictly in the OR. She later became Supervisor of the OR program in Souris in 1995. Most recently, she worked closely with Dr. Davloor and Dr. Myers among others until well past retirement age to keep the surgical program alive.

Everyone knew of Gwen’s dedication to her profession. Rarely would she take a break, she would eat only a small snack at her desk, and would be 30 minutes early for every shift. Through her work she made countless friendships, so many of which have endured to this day.

Gwen took great pride in her family. As a young mom, she preferred to stay at home with her two boys. There never seemed to be a dull moment for the family of four. Gwen loved to host and entertain. As the boys became adults with families of their own, Gwen and Glen’s home became a meeting place for countless gatherings. Often the card games, music, and laughs would carry on into the wee hours of the night. She loved being a grandmother and thrived at it.

Gwen and Glen took many trips over the years, travelling to sunny hot destinations in the winter. For more than 25 years, the highlight of their summer was going down to the Black Hills on their bike to the Sturgis Rally. Here she enjoyed socializing with friends old and new at the “Canadian Embassy”, a well known gathering place.

Gwen was survived by her loving husband of 49 years Glen, sons Andy (Allison), Greg (Nicole), grandchildren Drew, Maria, Riley, and Charlee, her brother John (Vonna), numerous nieces and nephews and many close friends. She was predeceased by her parents Frank and Edna (Gow) Swaenepoel, and twin sisters Linda and Leona.

A celebration of Gwen’s life was held at the Souris-Glenwood Memorial Complex on July 12th, 2019. A private internment was held in the Souris & Glenwood Cemetery with Reverend Harvey Hurren officiating.

Glen and family wish to thank everyone for their support, visits, calls, and food. Special thanks to Dr. Sopel, first responders, STARS, and all health care personnel for their excellent care.

Donations in memory of Gwen may be made to the Souris & Glenwood Foundation (Box 518 Souris R0K 2C0) or a charity of your choice. Kowalchuk’s Funeral Home, Souris, in care of arrangements. Expressions of sympathy may be made at www.kowalchuks.net.