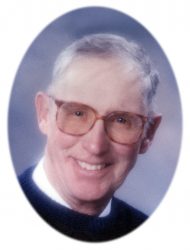 McEvoy, Albert Grant; It is with sad but grateful hearts that the family of Albert McEvoy announce his passing on September 16, 2014. Albert Grant was born August 15, 1925 on the farm at NE 20-10-21 Whitehead Municipality and passed away there as well. He was the only child of Acey and Sidney (Magee) McEvoy. Albert’s entire life was spent living and working on the family farm at Alexander. He also drove school bus for 13 years for the Brandon School Division. Albert was a faithful community member, supporting the church, rink, community clubs and was a member of the Canadian Order of Forresters. In 1963 he married Georgina Pearson. Four children were welcomed: Alison, Ken, Bill and Jennifer. Albert was predeceased by his parents Acey and Sidney, in-laws George and Mabel Pearson, daughter Jennifer Boekeman, many aunts, uncles, cousins and friends. His memory is cherished by his wife of 51 years Georgina, children Alison (Mark) Murray, Ken (Patti), Bill (Vreni) and son-in-law Tim Boekeman. Eleven grandchildren who are so special: Alexandra and Julianna Murray; Lauren, Logan and Jack McEvoy: Annie, Layah and Sarah McEvoy: Josh, Keely and Spencer Boekeman: sister-in-law Jean Voth, brother-in-law Jim Pearson, cousins and cousins-in-laws. Donations in Albert’s memory may be made to the Manitoba Lung Association, 8-940 Princess Ave. Brandon, Manitoba R7A 0P6 or a charity of one’s choice. A graveside funeral service was held at the Alexander Cemetery on Tuesday, September 30, 2014 at 11:00 a.m. Lunch and visiting followed the service at the Whitehead Hall in Alexander.