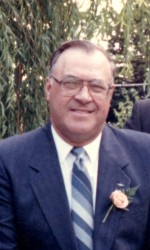 COE: Wilfred James Coe, beloved husband, father, grandfather and friend passed away peacefully after a long and courageous battle with Parkinson’s on September 13, 2014. He is survived by his sons, Taylor “Jim” (Gaye), and Wilfred “Brad” (Lorna), brother Jim (Bertha) Coe and sister Brenda Stanley and grandchildren, Robert, Kevin, Melissa (Scott), Teresa, Julie, Timothy (Chantal) and  great grandchildren, Kianna Smith and Addison Coe. He was predeceased by his wife Dorothy in 2012, parents Bernard and Melissa Coe, brothers Lawrence and Herbert Coe. Wilfred was born on March 16, 1930 in Cobourg, Ontario. His mother died in 1938 and his grandmother helped raise the boys until after the war. Wilfred joined the army in 1947 and was posted to the Royal Canadian Horse Artillery in Shilo. He met his future wife Dorothy at a dance in Brandon and they were married eleven months later in Hartney on November 4, 1950. In 1956 he was posted to Winnipeg until his discharge in 1962 when they took over the family farm in Hartney, where they enjoyed farming for many years. He enjoyed restoring old cars and became a wheelwright in his later years, making his own tools, restoring many wagons and he restored many of the wheels of the WW1 guns at the RCA Museum in Shilo. Wilfred was involved in many community organizations such as the Royal Canadian Legion, Masonic Lodge, Hospital Board as well as being Mayor of Hartney for four years. Wilfred and Dorothy also enjoyed the many years of square dancing with the Elgin Whitewater Whirlers. During his last years, he often expressed appreciation for of his many lifelong friends he had made over the years. Wilfred will be sadly missed. “Our family chain is broken, and nothing seems the same, As God calls us one by one, our chain will link again. Donations may be made to the Manitoba Cancer Society or Parkinson Society Manitoba.