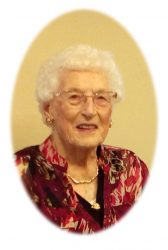 Reid — Muriel Eileen The family of Eileen Reid is sad to announce her passing on November 20, 2014, in the Souris Health Centre just three weeks after celebrating her 90th birthday with family and friends.

Eileen was born in the Huntingdon District on October 26, 1924, to Fred and Annie (Mote) Carlisle and moved to the Whitefield District at the age of five where she lived until she married Rilance Reid. They farmed the Reid family homestead west of Souris until retiring to town in 1984.

Eileen was predeceased by her husband Rilance in 2010 and was the last surviving member of the immediate family, being predeceased by sisters Thelma and Dorothy and brothers Lawrence and Clint.

Funneral services were held November 24, 2014, at St. Paul’s United Church in Souris, Mb. If so desired, memorial donations may be made to Hillcrest Museum in souris or a charity of choice.