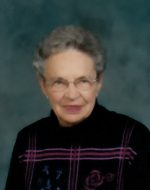 Betty passed away peacefully at Souris Personal Care Home on Dec.10, 2016 at the age of 93. Betty was predeceased by her husband, Harvey, her brothers, Don and Jim, and her sister-in-law, Shirley.

What Betty valued most was time with her family. She leaves to cherish those memories her daughter Carol (Bill) Potter and son Brian (Kathie); grandchildren Tara (Harley) Waddell, Ryan (Allison) Potter, Colin (Melanie) Potter and Kelly Saunderson; great grandchildren Brayden and Parker Waddell and Liam and Norah Potter. She is also lovingly remembered by her brother Terry (Suzanne) McBurney and sister-in-law Jean McBurney, as well as nieces and nephews.

Betty was born to Joyce and Harriet McBurney and grew up on the family farm southeast of Hartney. Following grade 12 she went to Winnipeg to Normal School. During her years teaching and boarding in the Whitefield district she met Harvey. Following their marriage in 1945, Betty settled into life on the Saunderson family farm west of Souris and enjoyed involvement with the Whitefield-Breezelawn district and working with the Guild women. Betty took pride in homemaking and in her yard and garden. As well as being involved in her children’s activities, Betty supported and worked for her church and was also a founding member of Beta Sigma Phi in Souris. The continuing involvement and friendship with her “sorority sisters” remained a special part of her life.

Betty and Harvey enjoyed their Souris retirement years, many in their home overlooking Plum Creek. Retirement allowed time for them to be active volunteers at Hillcrest Museum and to enjoy square dancing. They spent a number of winters in Weslaco Texas where they made many new friends. Other valued times were spent closer to home in their motor home, camping in spots in Manitoba with friends, and often with grandchildren.

Betty lived with Parkinson’s disease for over 20 years. She bravely continued with her activities for as long as she could but eventually the disease robbed her of most abilities. For her last seven years Betty was a resident of Souris Personal Care Home and the family wishes to thank Dr. Cram and the staff at PCH for the care and support she received.

A memorial service was held on Saturday, May 13, 2017 at St. Paul’s United Church in Souris. If friends and family so desire donations can be made to Hillcrest Museum Souris or to the Parkinson Society Manitoba.