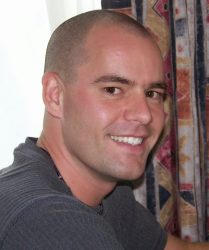 John Frederick Willan –
Lee Anne and her family are overwhelmed by the outpouring of love and support from family, friends, co-workers, and the people of the Town of Souris.
This sudden loss has created a huge void in their lives. We all took it for granted that John would be here for many years to see his children grow, and to retire with Lee Anne in their chosen home of Souris.
John was born in North Bay, Ontario, and lived in various towns in Ontario. John was very active in sports in his younger years. He played hockey from Jack’s age until his teens and made the travelling team each year. He played baseball in the summer and took up curling in college and made the varsity team. Sport was his life and instilled in him the competitiveness that lasted his entire life. John was a morning person, he loved to torture his older sister Beth. They fought like cats and dogs as kids but Beth knew that John always had her back. When Beth went through a hard time, she got a big package in the mail. It was a beautiful fleece panda bear blanket from her brother. He just knew that she needed something and it was the closest thing to a hug that he could send in the mailJohn and his first wife Rachel were childhood sweethearts, together they grew up and learned a lot about life and love. Together they had 2 children Johnny and Alyssa who have always been their pride and joy. John beamed with pride when Johnathan James Bryan Willan was born on March 4, 1993, the exact same day his mother Rachel was born 20 years earlier. To this day her best birthday gift ever. Johnathan was named after his father and great uncle, making him John Willan the 3rd.“Johnny” as John would call him, and John shared and created many great memories and moments together. One of his fondest moments was when John brought Johnny to the Dallas Cowboys Stadium and took pictures standing in front of Emmet Smith’s locker and on the famous Blue Star Centerfield.>Daddy’s little princess Alyssa Ruby Dianne Willan was born on October 17th, 1999. Alyssa had her daddy wrapped around her little finger from the moment she was born. John adored his little girl and when she was younger would affectionately call her Peppa. She also has a competitive nature and John was so proud of her figure skating.

John and Lee Anne had a whirlwind romance. They met online on February 14th, 2007, met in person in March, got engaged in April, and were married on July 20th. Lee Anne had found her Prince Charming and they were so much in love. There were some fun discussions of the merits of Ontario vs. Manitoba. John thought that Canada ended at the Ontario border. Semi’s were transports, kielbasa was kubussa and what are dainties? He did come to love Manitoba and the many friends he made here.Leeam was thrilled when his mom met John and he now had his own Dad. John and Leean shared a love of sports and he was an awesome hockey and baseball Dad. Leeam was thrilled when he and his Dad travelled to Toronto to see a Blue Jays game together last year. He also gained an extra set of parents in Bill and Nora, Lee Anne’s parents and an extra sister in Tara. They were just close enough living in Winnipeg…..In all seriousness, it was wonderful to have the support of family close by.John’s favourite time was when Alyssa was in town – he would go to great lengths to ensure she could visit often. John was an avid airmiles collector and would make grocery lists for Lee Anne based on the most airmiles he could get, he even convinced his work friends to join him on the airmiles bandwagon!  His most meaningful times were when all of his kids were together. He was looking forward to Alyssa’s grad this year and knows that she’s going to do great things. He would also often talk about what he saw for Leeam in the future. He was so proud of all of his kids, knowing that they are bright, talented young adults. John was a master camper and some of their most cherished memories are playing on the beach, sitting around the campfire and erecting the yurt, which was more like a house…  John may be the only one who actually loved the yurt, although everyone appreciated it once it was up! John camped in style and loved spending quality family time together in the woods.Jack joined their family in 2012, a product of so much love – this little redheaded boy is John’s mini-me, sharing his fun and mischievous characteristics, he is such a joy. John made an ice rink in the back yard many winters and Jack is having so much fun learning to skate this winter. Next year – hockey!With the birth of Johnny’s son Ben, John and Rachel became grandparents. It was truly a gift that John got to experience the love of his grandson and the intense joy of watching your child become a parent.John loved with his whole heart. He was a big presence. You either loved him or hated him but you couldn’t ignore him – he was oh so smart, and funny as hell – especially after some time with his friend, Jack Daniels, they were close.John was a hard worker, he valued hard work and was a committed coach and community-minded person. He was a successful salesperson, working most of his career in sales and marketing. He could talk an eskimo into buying ice. John loved hosting bonfires and spending time with friends. He especially valued the relationships that were built through coaching and spending time with Leeams team parents: the Vandals and the Whites, the Kleins and the Henusets. Spending so much time in cold rinks and travelling together, our hockey friends become more like family.John had Sundays off and Sunday was family day. They’d often go to the beach or just for drives in his beloved jeep “no roof, no doors” carefree as could be. John loved simple, quiet adventures, just being together with his family. He loved living in Souris, he loved this community.Everyone feels cheated by his early departure. HIs Mom and Dad, Fred and Diane were so proud of the life that he built. This sudden loss has created a huge void in their lives. He was his mother’s pride and joy. She lost piece of her heart that will never heal and she will always miss him.We all took it for granted that John would be here for many more years. Sadly John was afflicted with an illness that not many of us understand. The stresses of life were too much for him. For people who don’t know what depression can look like, it’s an illness that lies to you. John couldn’t always believe that he was valued and wanted, but this couldn’t be further from the truth. He was hard on himself and his illness would make small problems overwhelming. What could look like a bad friend, poor communication, lack of support is really a person who can’t bear to leave the house, who can’t answer a call and who thinks that he’s not worth enough for people to care or miss him. He would have stayed with us if he could.We’re so grateful for the gifts he left, his 4 children, the loves of his life, the friends he made memories with and the legacy that he leaves behind in all of us.

In memory of John, donations may be made to the Mood Disorders Association of Manitoba Inc. 4 Fort Street. Suite 100 Winnipeg, Manitoba R3C 1C4 or a charity of your choice.