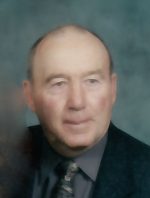 It is with great sadness the family announce the passing of Willard Glen Spratt on January 4, 2022. He was the second of four children born to Willard and Marjorie (St. John) Spratt of Elgin Manitoba on April 25, 1931. Glen will be lovingly remembered by his wife Shirley of 56 years, and children Cheryl (Don) Tufts of Boissevain, Ross (Maria) Spratt of Winnipeg, and Colleen (Dave) Wozny of Winnipeg; grandchildren Erin (Jason) Henderson of Portage la Prairie, Alanna (Dustin Conrad) of Calgary, and Derek (Pam Kerkowich) of Minto; great grandchildren Dillon, Gavin and Ethan Henderson, and Dilynn Conrad; sister Jean Lovett of Killarney and sister-in-law Irma Spratt of Brandon; as well as many nieces and nephews. Glen was predeceased by his parents, brother Harold, sister Mary McPherson, brothers-in-law Ken McPherson of Brandon Hills and Winston Lovett of Killarney.

Glen attended Elgin School. In winters, he did chores for the neighbours when needed. Glen taught Sunday school for many years at Elgin United Church. After graduation Glen continued to work on the farm, and also had winter jobs.  One winter he worked as a doorman at the Marlborough Hotel in Winnipeg, another winter he worked in Pine Falls cutting wood with a bowsaw for the pulp mill, where he was paid by the cord. The next winter job involved driving a cat train (International TV14A) over frozen lakes. They moved the town of Sherridon to Lynn Lake using three cats and six drivers working rotating shifts.  They pulled five sleighs carrying houses, the bank and school buildings, fuel, groceries, etc. In 1950, he attended Edmonton Technical School, and studied welding and mechanics.

Glen purchased the farm, west half of 36-5-21, from his Dad in 1952. He was a grain farmer, had a registered grain cleaning business for many years and some winters he kept feeder steers. 2013 marked 100 years for this fourth, now fifth-generation farm. Glen married Shirley on April 10, 1965 at Trinity United Church in Brandon. They built a new home on the farm in 1966. In 1995, after many years of farming, nursing and raising their family, they retired to their home in Souris. They had a front row seat to the 2011 flood.

Glen and Shirley enjoyed trips to Las Vegas, Oahu and Nicaragua. They also enjoyed family trips to the Mayan Riviera, the Henderson’s wedding on Maui, and an Alaskan cruise.  Glen and Shirley enjoyed 28 years at the Royal Scott in Victoria. He loved Thanksgiving gatherings with family at the property on the Souris river. This is a special annual family tradition that has been going on for nearly 20 years. Glen was very proud of the farmers, technical and engineering careers of his family. He was especially proud of the many nurses in his family; his mother, two sisters, wife, two daughters, and two granddaughters have nursing careers spanning from 1924 to the present day.

Farming was always very important to Glen. John Deere green was the right choice for farming equipment, as far as he was concerned. With the help of his family, they restored many antique plows and John Deere tractors, as well as a 1929 Chevy truck. Glen’s love and his dry sense of humor will be missed.

Shirley gave him a picture of an old John Deere and the verse at the bottom said it all; “There are three things in life that I hold most dear, God, my family and my trusty old John Deere”.

A celebration of Glen’s life will be held at St. Paul’s United Church, Souris, Manitoba on Saturday April 23, 2022 at 11:00 a.m. followed by a private interment in the Elgin Cemetery. Thank you to Dr. Cram, Dr. Sequeira, all the nurses, hospital staff, homecare, Kowalchuk’s  funeral staff, neighbours, family and friends for their concern and support. In memory of Glen, donations can be made to the St. Paul’s United Church Memorial Fund or Manitoba Heart and Stroke.