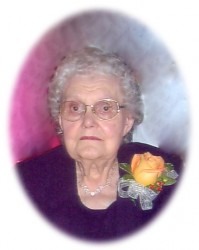 Thomas-Edna Viola, beloved wife of Joseph Thomas, mother of Terry, Sharon, Brent and Murray, died in the Souris Health Centre on Tuesday, January 21, 2014 at the age of 92 years. Funeral service was held at the Lauder United Church, Lauder, Manitoba on Friday, January 24, 2014 at 2:00 p.m. Private interment in the Riverside Cemetery, Hartney, Manitoba. In memory of Edna, donations may be made to a charity of your choice.