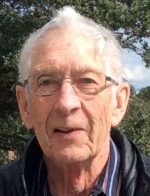 Watson, Cecil Arthur “Art” of Souris Manitoba, husband of the late Doreen Watson passed away on September 18, 2017 at the Personal Care Home Souris, Manitoba. Art was born at Elgin, Manitoba to Bill & Eliza Watson December 29, 1933. In 1942, Art moved to Souris with his family, he and his mother stayed at a boarding house while his Dad served in the Air Force. While attending school Art worked at Pollock’s Groceries stocking shelves and making deliveries. Art recalled a story while riding his bike across the swinging bridge to deliver a sack of sugar to the hospital. On route the sack ripped, spilling its contents. The nurses chipped in to pay for a replacement. Art returned to the store to confess to Mr. Pollock and to get another sack of sugar. Art never forgot that act of kindness for the rest of his life.

Over the years Art belonged to the Elk’s Lodge, Legion and the 12th Manitoba Dragoons. With the dragoons is where Art developed his military stride. Good luck trying to keep up with him when he was in his prime. He was an avid walker throughout his life.

In 1952 Art began working at Murrays in Souris first on the wash rack and eventually to the parts department, a profession that he would have until May 31, 2000 ending his career at Murrays in Brandon.

On September 29, 1956 he married Doreen Lovatt and they had a wonderful life together until her passing in November 2009. Art always supported whatever his children Sandra & Wade were in to and attended many baseball and hockey games that continued with the grandchildren. Art was also in the stands when his wife Doreen was curling and obtained profound knowledge of the game.

Art loved to read and was often found sitting in his favorite chair totally absorbed by the story. He introduced that passion for reading to his children by taking them to the library. Art also enjoyed playing cards and board games with friends and family. He would play marathon games of Monopoly in the winters with his children and was actually quite ruthless, often winning those games.

From 1966-72 Art and his family lived in Estevan, Saskatchewan while Art pursued his career at Foley Motors. Upon return to Souris in 1972 to work for Lang Motors, the family settled “across the river” living next door to their lifelong friends, The Doherty’s, until they moved “uptown” in 2009. When Art’s health declined he then moved to Victoria Park Lodge and finally to the Personal Care Home in August 2013.

The family would also like to thank the staff at the Personal Care Home and Dr. Cram for their tender care and support given to our Dad over the years.

We know Art is now sitting in a lawn chair on a sunny summer day wearing a ball cap, slightly askew, book in hand and a favorite beverage nearby. Rest in Peace Art.

“Life is what you celebrate. All of it. Even its end.”