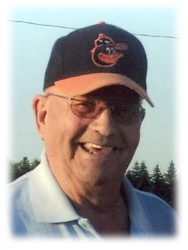 Wells, Edgar William:  It is with deepest sadness that we announce the passing of our father and “Poppa”, Ed Wells on December 13th, 2012 at the Souris Health Centre. Ed will be lovingly remembered by son Clint (Tannis), daughter Kim (George), grandchildren, Tara(Cory), Melissa (Shaun), Jillian, Cole ( Debra) and Jessica (Jon), and great grandchildren, Saydee, Mayson, Austin, Brayden and Brittney.  He was predeceased by wife , Janette (Cruise) in 2009 and daughter Georgia, in 1960.

Ed was born to Joe and Verna Wells of Ewart, Manitoba in the Virden Hospital on December 12, 1930. He attended school in Ewart until November of 1939 when the family moved to Dauphin, Manitoba. He married Janette Cruise on May 10, 1952.  In 1958, they ,along with son Clint and daughter Georgia moved to Hartney.  Kim was born in Hartney in 1958.  Hartney was to remain their home for the rest of their lives.

Dad purchased the BA garage and bulk Petroleum in 1958. He sold it in 1966 and was employed for the majority of his years with the Hartney Co-op as Petroleum manager. He was a member of the Hartney Flying Club, Masonic Lodge, Hartney Curling Club, Hartney Golf Club, and Hartney Legion. He was also very active in the Hartney Junior Sports Club over the years. Dad had a lifelong love of sports . He especially enjoyed hockey, baseball, golf and curling. Together they (mom) attended several briers, and enjoyed meeting new people along the way. He remained an active golfer right into his 82nd year, always enjoying the opportunity to try a different course and visit a new club. He was an avid fan of the Hartney Blues, the Westman Wildcats, the High School hockey team, Hartney Hoppers and Hopperettes. Dad liked to tour the countryside — driving many miles — taking in the scenery, visiting historic sites, looking at the crops , old barns and machinery. He and mom travelled to many small towns on the harness racing circuit — always finding a new route to travel. Dad really enjoyed people, young and old alike. He loved being around the youth of the community and had a tremendous respect for the pioneers and the “characters” that came before him. His dedication and commitment to the Hartney Legion was a great source of pride for him, and he would have been humbled and touched by the participation of the Legion Honour Guard at his funeral service. The most important people in his life were his family. We shall all cherish the happy times spent with him —and know in our hearts — that he is at peace.

Funeral services were held at the Hartney United Church on December 17, 2012.